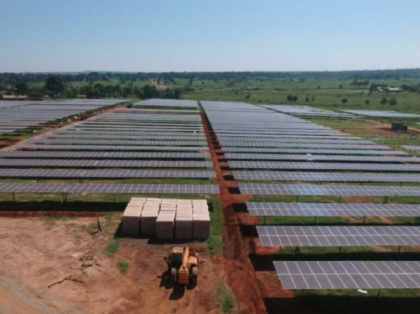 According to the Greek company, Metka EGN, the facility is equipped with the latest technology available on the market, with a system that allows solar panels to track the sun.

The 10-megawatt photovoltaic solar power plant is built on an area of 40.4 hectares to reinforce the local electricity grid since it became operational in early June 2019.

The project was financed and developed by the French operator Tryba Energy.

The management of the project has signed a power purchase agreement with the national electricity company, Uganda Electricity Transmission Company Limited (UETCL) for 11 US cents per kWh, at no additional cost, the lowest rate in the country.

Earlier this year, the French Development Agency (AFD) announced that it had financed a major rural electrification program in western and southern Uganda, covering 24 districts, including Kasese.

The Agency granted a concessional loan of €42.9 million for the construction of about 3,000 km of new low and medium voltage lines.

Electricity providers in Uganda are teaming up to find a new business model to boost the speed and efficiency of getting power to those living without it, in the hope it can be copied in other parts of Africa and Asia.

The country has a target to increase access to electric power from just a quarter of households now to 60 percent by 2027.