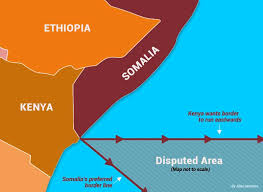 Kenya closes border with Somalia on backdrop of maritime dispute

It’s official. The government of Kenya has closed a border with neighboring Somalia indefinitely with cross-border trade banned in the process.

Rising tensions between Kenya and Somalia over political and economic interests have seen the two East African countries also spar pettily over border and immigration rules in recent months.

The border closure is the latest leg of a diplomatic rift over a maritime demarcation that is currently before the International Court of Justice in The Hague, Netherlands.

The Kenya-Somalia maritime border disputed area is about 100,000 km2, forming a triangle east of the Kenyan coast. The Somalis want the boundary to extend to the southeast as an extension of the land border.

In 2009, both countries agreed that the United Nations commission in charge of mediating border disputes should determine the borderline once and for all. They also agreed that they should continue to work together to find a solution so that the matter would not have to go to court.

Although Kenya and Somalia had agreed to settle the dispute out of court, Kenya appealed to the court in 2015. The court now wants to hear both sides first, before deciding whether it will initiate proceedings.

Similar conflict has opposed Ghana and Côte d’Ivoire about their boundary in the Atlantic Ocean. The area is believed to hold the biggest hydrocarbon resources discovered in West Africa over the last decade.