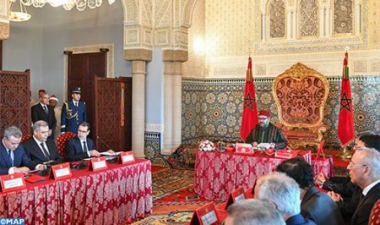 King Mohammed VI chaired Tuesday afternoon a Council of Ministers that endorsed several legal texts and international agreements, according to a statement by spokesman for the Royal Palace, Abdelhak El Mrini.

These include the Morocco-European Union partnership agreement in the field of sustainable fisheries, its Protocol of implementation and the exchange of letters accompanying the said agreement. The Council of Ministers approved the agreement in the form of an exchange of letters between Morocco and the EU on the amendment of Protocols 1 and 4 to the Euro-Mediterranean Agreement establishing an association between the European Communities and their member States, on the one hand, and the Kingdom of Morocco, on the other hand.

Other agreements endorsed aim to strengthen Morocco’s cooperation with partner countries in the judicial field, in the fight against crime, in the economic and commercial field, as well as in the areas of defense, tourism, commercial shipping and international road transport.

The approved legal texts include decrees and draft decrees meant to improve the situation of the members of the Royal Armed Forces, the decree on the new allowances to be granted to military personnel, Auxiliary Forces, civil servants and public institutions employees as adopted in the context of social dialogue as well as the draft decree reorganizing the Civil Protection School.

The Council of Ministers approved the appointment of Lotfi Sekkat as chairman and chief executive officer of Crédit Immobilier and Hôtelier.

Long time number 2 of CIH as Deputy Chief Executive in charge of the pole “Finances, Risks and Resources” of the bank, Lotfi Sekkat succeeds Ahmed Rahhou who has been appointed last February ambassador to the European Union.

The Council also endorsed the appointment of Abderrahim Chafii as director of the Solidarity Fund against catastrophic events.