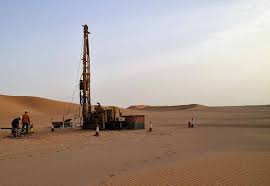 Mauritania will enter the limited list of uranium producing countries in 2020 following the promising findings of the Australian mining company Aura Energy in the Tiris Zemmour mine.

“The production of yellowcake is a true milestone for Aura Energy’s push to achieve producer status. To achieve yellowcake production from our site in the Sahara Desert has required commitment and stamina from our dedicated technical team.”

Yellowcake (also called urania) is a type of uranium concentrate powder obtained from leach solutions, in an intermediate step in the processing of uranium ores.

The company said the mine offers promising prospects for commerciable uranium, which will enhance the finances of the sparsely populated and poor West African country.

Aura Energy was granted last year an exploitation license for its Tiris uranium project in Mauritania.

Mauritania’s economy is dominated by extractive industries (oil and mines), fisheries, livestock, agriculture, and services. Half the population still depends on farming and raising livestock

Extractive commodities make up about three-quarters of Mauritania’s total exports, subjecting the economy to price swings in world commodity markets.