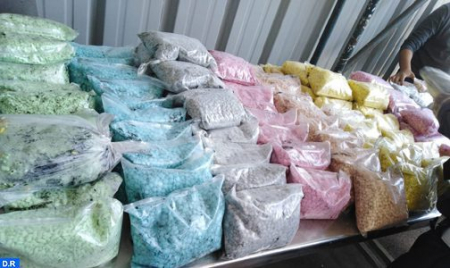 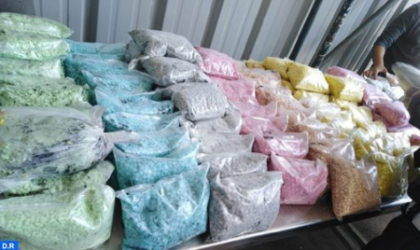 Policemen seized a total of 568,000 ecstasy pills that were aboard an international cargo truck registered in Morocco and coming from the port of Algeciras, Spain, national police said in a statement.

The truck’s driver and his assistant, aged 48 and 26, respectively, have been arrested and remanded in custody, the statement said.

Investigations are underway to determine possible ramifications of this case.

In Rabat, the police arrested the same day, on the basis of precise information provided by the services of the General Directorate of Territorial Surveillance (DGST), three individuals, including a couple, for their alleged involvement in drugs and psychotropic substances possession and trafficking.

The first suspect was arrested at the Rabat train station upon arriving from a Moroccan northern city, said the Directorate General of National Security (DGSN) in a statement. The search operation revealed the individual was in possession of 2,280 psychotropic tablets.

Immediately afterwards, another individual subject to an international arrest warrant, and his wife, were arrested. The two are suspected of being the main traffickers of the drugs seized at the train station.

These operations fall within the framework of the fight against the trafficking of psychotropic substances and efforts to hamper their infiltration to Morocco. They are also part of efforts to dismantle international networks trafficking this type of drug, considered a transnational crime.

North Africa Post's news desk is composed of journalists and editors, who are constantly working to provide new and accurate stories to NAP readers.
NEWER POSTMauritania: Controversy over concession of F’Derick iron deposit
OLDER POSTMorocco in top 10 US food suppliers