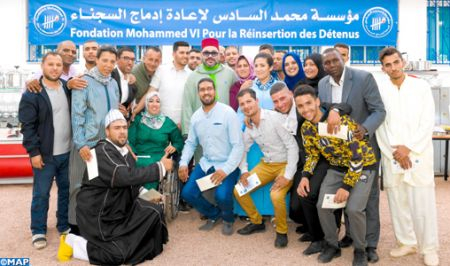 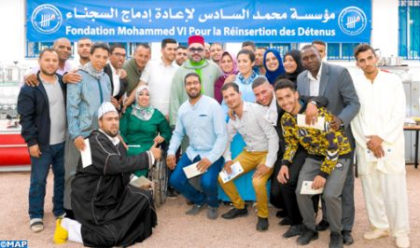 King Mohammed VI who attaches great importance to the social and professional integration of former inmates launched, on Monday in Casablanca, the 2019 national Program to support micro-projects and self-employment of former detainees.

On this occasion, the Sovereign handed equipment and support checks to 26 former inmates carrying income-generating projects. Six women and two former residents of child protection centers are among the beneficiaries.

The funds earmarked this year for the program, initiated by the Mohammed VI Foundation for the reintegration of detainees, amount to over 13.5 million dirhams, compared to 8.1 million dirhams in 2018.

Some 478 former detainees, initiators of project in sectors such as trade, industry, services, crafts, catering, agriculture or construction will benefit from the 2019 program.

The former detainees elaborated, with the assistance of the reintegration services, their personal projects while in detention, where they underwent vocational training and acquired expertise.

Eighteen beneficiaries of this Program have been convicted in cases of extremism and terrorism and have participated in the “Reconciliation” program (Moussalaha), meant to reintegrate these detainees and reconcile them with society.

This action, which has a strong social impact, testifies to the particular interest that the King gives to the future of inmates and to his firm determination to see to it that they benefit, without any discrimination or exception, from an adequate socio-professional integration after their release.

It also reflects the royal vision to strengthen security in society, combat crime, reduce recidivism and create income-generating activities (IGAs) to improve the future and quality of life of people who have transgressed the law.

The program to support micro-projects and self-employment of former inmates is part of the Mohammed VI Foundation’s integrated socio-professional reintegration strategy. In 2018, it enabled 453 former inmates, including 87 women, to work in socially responsible companies.

This strategy, which is being implemented in partnership with several stakeholders, aims to make of prison a second-chance school, an environment of re-education, learning and expertise acquisition.