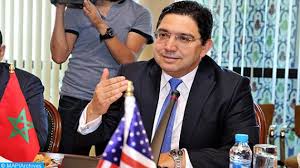 After the UN Security Council adopted on April 30 resolution 2468 on the Sahara with an overwhelming majority, a resolution in which the US played a crucial role consolidating Morocco’s stand, Foreign Minister Nasser Bourita held lately intensive meetings with US officials in Washington-DC.

According to reliable sources cited by Hespress website, Mr. Bourita held over the weekend several meetings with top US government officials on the Sahara issue.

This diplomatic offensive launched by Rabat in the United States is part of a new a proactive strategy adopted by the Moroccan Foreign Ministry in dealing with the Sahara issue. Under this strategy, the Moroccan diplomatic campaigns will be dynamic and no longer tied to the month of April or October coinciding with the renewal of the MINURSO mandate and the UN Security Council reports on the Sahara issue.

The United States, the pen-holder of resolutions on the Sahara, did not give in to the pressure exerted by Algeria and the Polisario within the frame of their orchestrated hostile campaigns launched against Morocco.

UN resolution 2468 reinforced Morocco’s legitimate stand as it reaffirmed the preeminence of the autonomy plan offered by Rabat for the Sahara, stressed the need to count the Sahrawis sequestered in the Tindouf camps and renewed UN calls for the Polisario to respect the ceasefire, honor its commitments and stop its provocative actions in the east & south buffer zones.

Furthermore, the Trump administration supports Algeria’s participation in the efforts engaged to reach a final solution to the Sahara conflict.

During the latest UN Security Council debate and vote on the Sahara resolution, Rodney Hunter, the political coordinator for the US mission to the United Nations, called on neighboring countries to cooperate more in order to achieve a political solution, describing Algeria as a party to the Sahara issue.

The UN resolution also deems Algiers as a main stakeholder in the UN-led process aiming to find a political, realistic, practical and lasting solution to the Sahara regional conflict.

The US diplomat had also stressed that “the goal of the Security Council should be to propose a timely and mutually acceptable political solution”.

According to diplomatic sources, there is an earnest desire among Security Council members, especially the United States, to advance the Sahara political process with a view to reaching an enduring political solution to this dispute.

North Africa Post's news desk is composed of journalists and editors, who are constantly working to provide new and accurate stories to NAP readers.
NEWER POSTRegional Branch of Mohammed VI National Center for the Disabled inaugurated in Casablanca
OLDER POSTSahara: Peruvian NGO drops push for an ‘independent’ entity in favor of Morocco-proposed autonomy