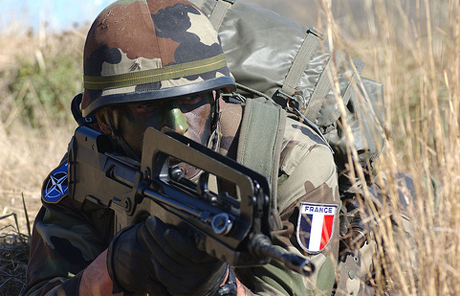 When the French troops launched a military operation in Mali on 11 January, the official places in Paris declared that it was aiming at stopping the advance of Islamists from their bases in the north of the country to its southern part. In this context, analysts have pondered possible reasons that lead to the invasion, varying from a fight against terrorism to efforts to extend the Western economic influence.

To begin with, until quite recently, Mali was a typical West African state with constitutionally secular political system whose predominantly Muslim population generally adhered to a mostly moderate form of Islam and where religious minorities – Christians and animists – were not by and large discriminated against. But this constellation in the wider region and the country started changing following the downfall of Libya’s dictator Muammar Gaddafi.

To stage a war, one needs three essentials: fighters, weapons and cash. The capture of the northern part of Mali by Tuareg separatist rebels and Islamist fighters in 2012 was aided by a rich supply of all three ingredients that were provided both by Libya’s old regime and also, perhaps paradoxically, by Western governments. Muammar Gaddafi was a prolific arms buyer and he also used his spending billions in oil revenues to recruit mercenaries who then in turn fought to defend the late Libyan strongman. Literally within hours of Gaddafi’s widely publicized death and the subsequent downfall of his brutal regime, the same mercenaries fled back home, many of them across the border to Mali, bringing with them powerful and sophisticated weaponry and forming the most powerful Tuareg-led rebel group, the Azawad National Liberation Movement (MNLA).

Though expressing anxiety over the pipeline of weapons to Mali’s insurgents from Libya’s former regime, Western governments actually provided over the past few years the third important essential component needed to launch a war: the cash. The jihadi groups in Mali and the wider region are flush with money that comes from Western governments who were often willing to pay Islamist groups millions of dollars to free European hostages – tourist, employees of oil companies and missionaries – kidnapped in the vast Sahara Desert. Thus, these complex circumstances facilitated the peculiar patchwork of Islamist militias and ethnic separatist groups to take control of Mali’s northern territories last year. The insurgents followed up with the establishment of an Islamist state, based on a strict implementation of Sharia law, and later moved to the south toward the capital, Bamako.

Upon the deployment of French troops in Mali, President Francois Hollande stated that France – the former colonial master in West Africa – aims to stop the heavily-armed rebels’ advance and eventually restore stability and security in the country. Even though the French intervention was widely welcomed by Malian population keen to see the rebels driven out of the northern Mali and although it was soon joined by the Africa-led International Support Mission to Mali (AFISMA) organized by the Economic Community of West African States (ECOWAS), these unfolding developments have given rise to various suspicions and conspiracy theories. Most of them revolve around the assumption that the French intervention is only a latest move in the well-planned Western strategy designed to regain its sphere of influence and re-colonize the African continent.

For example, Montreal-based independent research and media organization, The Centre for Research on Globalization (CRG), argues in its analysis ‘Military Intervention in Mali: Special Operation to Re-colonize Africa’ that the military operation in Mali constitutes “an orderly and consistent capture of new African territories by Western powers”. The report denies the interpretation that the West only seeks to defend Mali’s sovereignty and territorial integrity and defeat the Islamist extremists: “They have got hold of Sudan by dismembering it (taking away the oil deposits from the major part of the country), the Nigerian oilfields have been captured in accordance with the International Court of Justice rulings, Libya has been captured as a result of direct military intervention, Cote D’Ivoire has been conquered thanks to a small-scale military action conducted under the aegis of the United Nations. The way to do the things differ, but the result is the same. The process of re-colonization picks up momentum in Africa…”

Similarly, in an interview entitled ‘Pentagon’s Hand behind French Intervention in Mali’, freelance journalist William Engdahl raised doubts about the official reasons for the French invasion, calling it “French neocolonialism in action”. While describing the presence of al-Qaeda in northern Maghreb and the timing of its activities as a very suspicious operation, he suggests that the real reason behind the intervention is the huge finds of oil that have been recently discovered in northern Mali. Engdahl explains that “this whole thing bears the imprint of US Africom [US Africa Command] and an attempt to militarize the whole region and its resources. …that’s the Obama Administration’s strategy – let France take the hit on this as they did in Libya and other places in the past year and-a-half and the US will try and play a more discrete role in the background.” He then goes on concluding that “we’re seeing a very cynical game being played out here in Mali and it’s a very dangerous one when Africa is suddenly becoming a continent that’s been discovered by China, by the US and Europe and the rest of the world as the next place where untold wealth and resources can be captured.”

If the real reasons for the French military invasion are ever known, we will probably learn that it was a peculiar combination of this former colonial master’s economic and geopolitical interests – that undoubtedly largely coincide with those pursued by Washington – and Paris’s growing concern about the increasing destabilization of the region by Islamist militias and ethnic separatist groups. After all, France is Mali’s 2nd biggest importer, and also the Islamist rebels, now under attack in Mali, were in the past responsible for the kidnapping of dozens of French citizens in West Africa. Moreover, Mali is also probably the most important American ally in the region in its fight against terrorism. Last, but not the least, experts and policymakers both in the European Union and the United States – such as a recent piece in the Small Wars Journal blog – have repeatedly warned that, in light of the protracted instability, “Mali Could Become the New Afghanistan, Only Worse”.

North Africa Post's news desk is composed of journalists and editors, who are constantly working to provide new and accurate stories to NAP readers.
NEWER POSTOn Javier Bardem’s Cause in the Western Sahara
OLDER POSTMauritania/Algeria: global and objective evaluation of relations