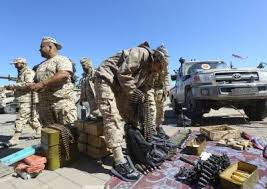 As battle of Tripoli drags on, Haftar’s funding erodes

The offensive on Tripoli waged by Haftar’s forces has lost momentum hitting a dead end as forces loyal to UN-backed government managed to thwart the attack. Meanwhile Haftar’s sources of funding are eroding as the conflict drags on.

Haftar attached utmost importance to securing necessary funding for his LNA forces but still the Government of National Accord in Tripoli has greater access to resources as the national oil company sends revenues to the central bank in Tripoli.

The central bank in Tripoli has a monopoly over access to foreign exchange enabling the GNA forces to endure protracted conflict.

The LNA, on the other hand, has relied on foreign support by the UAE and Egypt, which do not seem to be enough to sustain the war effort.