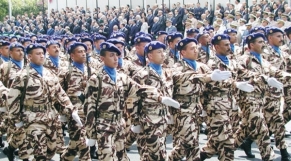 Morocco celebrates this Tuesday (May 14) the 63rd anniversary of the creation of the Royal Armed Forces, an opportunity to pay tribute to these forces, which stand as bulwark in the defense of the people and the Nation and which are tirelessly committed to international peace and stability.

Shortly after it regained its independence, Morocco set up on 14 May 1956 the Royal Armed Forces, which have since then served as an impregnable bulwark that has annihilated all external attempts, including the enemy’s maneuvers at the southeastern border of the kingdom.

This anniversary is an opportunity for the Moroccan people to remember the glorious epics recorded by the FAR, from the War of Sands (1963) and the battles of Amgala I and II (1976), to the Sinai and the Golan (Kippur War of October 1973).

Besides defending the homeland, the FAR have also earned international recognition for their remarkable commitment to international peace and stability through their participation in several UN peace missions, including Kfor in Kosovo (since 1999 up to now), Minusca in Central African Republic, Monusco in Democratic Republic of the Congo…

On the orders of the King, the Supreme Chief and Chief of Staff of the Royal Armed Forces, Moroccan soldiers also carried out several humanitarian missions in the occupied Palestinian territories, specifically in the Gaza Strip, where a surgical field hospital offers medical services to the local population, as well as in Jordan, in the “Zaatari” camp where a contingent of FAR doctors continues to provide care to Syrian refugees.

If the FAR received special attention from the late Kings Mohammed V (founder) and Hassan II (builder), it is clear that the work of modernization was completed under King Mohammed VI, writes local news portal le360.

As an instance of this modernization, the portal recalled the major military acquisitions made in the last ten years. These include 24 F16 fighters acquired in 2013, 25 new F16 Viper type that have just been ordered, recently delivered 250 Abrams tanks and multi-mission frigates, including the Fremm Mohammed VI.

Besides the development of the FAR and the modernization of their military and defense capabilities, and their regular participation in drills with partner countries, the King was also keen on improving their combat readiness to deal with current and future threats and dangers, including terrorist, electronic and cyber threats.

Thanks to this qualitative leap, the FAR are today listed among the fifty most powerful armies in the world.