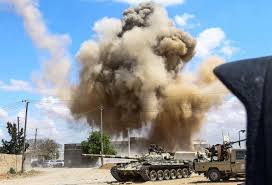 “The LNA military attack on Tripoli and the subsequent escalation in and around the capital constitutes a threat to international peace and security and further threatens the stability of Libya”, said the EU Foreign Affairs Council in a statement.

“The EU reaffirms its commitment to the sovereignty, independence, territorial integrity and national unity of Libya”, added the EU foreign ministers, calling on all parties to immediately implement a ceasefire and to engage with the United Nations to ensure a full and comprehensive cessation of hostilities.

They also called on all Libyan parties to dissociate themselves both publicly and on the ground from terrorist and criminal elements involved in the fighting, and from those suspected of war crimes, including individuals listed by the UN Security Council.

“The EU is deeply concerned at the loss of human life, the growing number of internally displaced persons and the impact on migration flows”, said the EU foreign Affairs Council.

It urged all Libyan parties to protect civilians, including migrants and refugees, by allowing and facilitating a safe, rapid and unimpeded delivery of humanitarian aid and services to all those affected, and as stipulated under the International Humanitarian Law and International Human Rights Law.

The EU warned that indiscriminate attacks on densely populated residential areas may amount to war crimes. Those breaching International Humanitarian Law must be held to account.