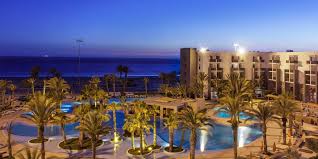 Morocco among top five stars of hotel development in Africa

Morocco is featured among the top stars of hotel development in Africa along with Egypt, Nigeria, and Ethiopia, according to the 11th annual survey by W Hospitality Group.

The four countries head the top ten by numbers of rooms in the internationally-branded hotel development pipeline, with Egypt showing 15,158 rooms in 51 new hotels.

According to the survey, Morocco, in third place, recorded an increase of 17.2 per cent on last year and signed 14 deals comprising 2,423 rooms in 2018. These include Onomo’s portfolio deal with Cantor Hotel Group (six hotels with 740 rooms) and Six Senses’ first deals in Africa, as they develop a chain of Kasbahs.

A total of 75,155 branded rooms in 401 hotels are in development across the whole of Africa – a net increase (ignoring recent openings and taking into account deals that have not come to fruition) of almost 11,000 rooms in the pipeline, 17% up on 2018.

The top-line figures show that in North Africa the rooms pipeline is up 2.3% on 2018, while in sub-Saharan Africa it is down 3.8% – largely due to several of the chains “cleaning” their pipelines, deleting deals that they believe are not going to happen. These cleaning adjustments amount to more than 12,000 rooms in 74 hotels.

Nevertheless, despite this significant adjustment, there has been growth of 51% in the total pipeline rooms since 2015 – North Africa up by 58%, and sub-Saharan Africa up by 47%.

This year, the top ten countries account for 69% of the total hotels in the survey, and 74% of the rooms.

Unsurprisingly, owing to the political situation in Libya, no new deals were signed and some previous projects have been cancelled, the survey pointed out.

Looking at the top ten cities, Cairo, with over 8,000 rooms in development and Addis Ababa, with over 5,000, have a clear lead. They are followed by Lagos (the leader for several previous years) and then Nairobi, Algiers, Abuja, Dakar, Abijan, Lusaka and Marrakech, the last two in the top ten for the first time.

In the battle of the brands, Accor is the strongest pipeline player in Africa with more than 27,000 rooms spread across 162 hotels. It is followed by Marriott with over 23,000 rooms in 135 hotels. However, if both complete their current development pipelines with no further additions, they will stand neck and neck with just over 40,000 rooms each operating in Africa. Hilton is in third place, Radisson fourth and IHG fifth, after which, there is a substantial gap between the big five and other international chains.