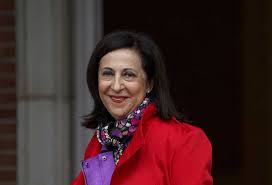 Spanish Minister of Defense Margarita Robles, on Wednesday, welcomed the cooperation existing between Spain and Morocco in fighting the networks of migrants smuggling operating in the Strait of Gibraltar.

“We have full confidence in the collaboration with Morocco” in the field of the fight against irregular immigration, she told the press on the sidelines of her visit to Moron airbase, in the province of Seville (southern Spain).

According to EFE, Robles said “a lot of work” is being done by both countries in the fight against illegal immigration.

She underlined the Spanish government’s resolve to continue to work in cooperation with Morocco, as well as to promote a common migration policy in the framework of the European Union.

Spanish ABC daily reported last week that the number of irregular migrants reaching Spain has dropped by 52% in April, compared with the same month last year.

The daily pointed out that this notable decrease was made possible thanks to cooperation with Morocco and the North African Kingdom’s efforts to foil migration operations and dismantle illegal migration networks.

Citing data from the International Organization for Migration, the newspaper reported that 820 illegal migrants arrived in Spain in April 2019, compared to 1,706 in April 2018.

The significant decline is mainly due to Morocco’s success in dismantling irregular migration networks and the security cooperation and information exchange between Morocco and Spain, the Spanish paper stated, highlighting Morocco’s “positive role” in “alleviating the migratory pressure on Spain.

The downward trend in migrants’ arrivals has been observed since the beginning of 2019, the paper noted.