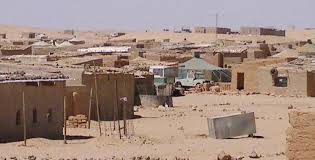 The Tindouf camps in Southern Algeria are rocked by growing protests of the sequestered Sahrawis who are rising up against Polisario militias’ oppression, impunity, injustice, torture and systematic violations of their basic human rights.

The separatists started feeling the heat after their Algerian masters were ousted by the popular revolt that is still ongoing. Things get worse for the Polisario with the change of tone of the United Nations and neighboring Mauritania.

In its latest resolution on the Sahara, the UN calls for realism and compromise, welcoming, once again, the autonomy plan offered by Morocco for the Sahara, without referring to the self-determination principle, which is obsolete and unworkable in the current times.

Mauritania’s president Mohammed Ould Abdel Aziz also dealt a hard blow to the Polisario with a recent statement where he said “the US, Europe and the West do not want a state placed between Morocco and Mauritania”.

In the Tindouf camps, the anger, frustration, enslavement, deprivation and repression of the sequestered Sahrawis were building up for years before imploding in the face of the Polisario leaders.

The protest movement of the Sahrawis against the Polisario is intensifying and expanding. In front of the Headquarters of the MINURSO, the UN High Commissioner for Refugees (UNHCR), or even near the border with Mauritania and the Bir Lahlou buffer zone, a growing number of Sahrawis gather frequently to denounce their ill-treatment by the polisario, their persecution, imprisonment, torture, lamentable living condition, repression and despair.

They demand freedom of movement and expression as well as the immediate resolution of their predicament, the departure of the current polisario leaders, the trial of torturers and the embezzlers of international humanitarian assistance.