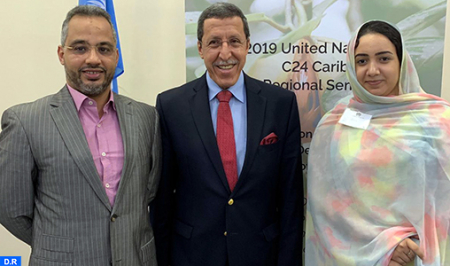 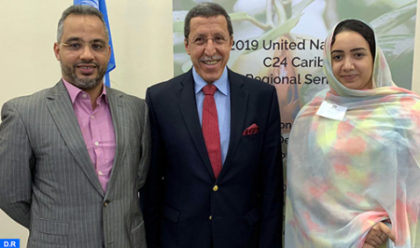 Morocco’s permanent representative to the UN, Omar Hilale, made before the regional meeting of the UN Committee of 24 held in Saint George’s, Grenada, May 2-4, a presentation that focused on the historical realities, the legal bases and the political dimensions of the Moroccanness of the Sahara.

The diplomat, insisting that the Sahara issue is for Morocco a question of territorial integrity and national sovereignty and not of decolonization, said the issue does not date back to 1963 or 1975. “It is rather anchored in the history of Morocco and its identity,” he said, noting that before the Spanish colonization of the Sahara in the late 19th century, this region has never been a terra nullius but rather a part of Morocco’s national territory.

This was confirmed by the advisory opinion of the International Court of Justice in 1975, which recognized the existence of ties of allegiance of the Sahara populations to the Kings of Morocco, as well as the Moroccan Sovereigns’ authority over this region.

This allegiance continues to be reaffirmed every year to the King on Throne Day, Omar Hilale said, recalling that it was Morocco, not Algeria or other countries, which inscribed the Sahara issue at the United Nations in 1963, while it was still under Spanish occupation.

The Polisario was not even created by Algeria at this time, he said.

The United Nations resolutions at that time asked Spain to give back the Sahara to Morocco through negotiations. This was achieved by the signing in 1975 of the Madrid Agreement, which was recognized by the UN General Assembly, the diplomat said, adding that this recognition sealed the return of the Sahara region to the motherland, Morocco.

Hilale said that all the previous plans aimed at settling the Sahara issue were obsolete and were buried by the Security Council and the UN Secretary General since 2004, while Algeria and the Polisario continue to cling to these inapplicable and unrealistic plans.

Hilale, underlining Algeria’s responsibility in perpetuating this regional dispute and its financial, military, and diplomatic backing to the Polisario, noted that it is quite normal that Algeria, which was at the origin of this conflict remains part of it until it is over.

He pointed out in this connection that the Security Council has defined the real stakeholders in the Sahara dispute, namely Morocco, Algeria, Mauritania and the “Polisario”. There is no longer, for the UN executive body “parties or neighboring countries”, he said recalling the participation of the four parties in the Geneva Roundtables, that he described as an opportunity that should not be missed.

Omar Hilale also noted that the latest Security Council resolution 2468, adopted on April 30, has mentioned Algeria as many times as Morocco.