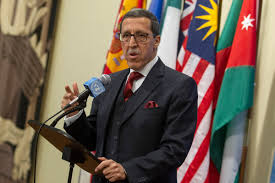 Omar Hilale: Polisario Must Understand the world has Changed

The polisario and its mentors must understand that the world has changed and that the era of separatism is bygone, said, on Tuesday in New York, Morocco’s ambassador to the UN Omar Hilale, affirming that autonomy remains the only solution to the Sahara regional conflict.

Speaking to journalists at the UN headquarters following the adoption by the Security Council of resolution 2468 extending the Minurso mandate for another six months, the Moroccan diplomat said “compromise is the only way to solve this dispute, and autonomy is the only solution we can hope for”.

He called on the polisario to turn the page on rhetorical discourses and ideological positions, and realize that “we are in the year 2019 and not in the 1970s”.

Morocco’s permanent representative to the UN said the Security Council reiterated, in resolution 2468, its call to the Polisario to comply with its resolutions 2414 and 2440 and to respect its commitments made to the Personal Envoy of UN Secretary-General for the Sahara of not returning to the Guergarate buffer zone and not moving its so-called administrative facilities to the zone, east of the defense structure in the Moroccan Sahara.

This is a new warning launched by the Council to the Polisario against its continued violations and provocations, which not only threaten regional peace and stability, as the Secretary General puts it in his report, but also risk to undermine the political process, said Mr. Hilale.