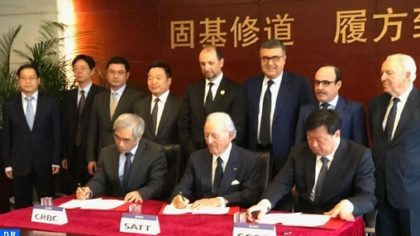 China Communication Construction Company Ltd. (CCCC), and China Road and Bridge Corporation (CRBC) will take over the construction and development of Mohammed VI Tangier Tech City that was initially set to be partly carried out by Chinese group HAITE.

The related Memorandum of Understanding was signed by Tangier Tech Development Company (SATT) and the two Chinese companies CCCC, and CRBC, on Friday in Beijing, on the sidelines of the Belt and Road Forum, China.

The MoU, which was initialed by SATT President Othman Benjelloun, CCCC Vice-President Liang Qingshan, and CRBC Vice-President Sun Yao Guo, reflects the determination of the three groups to develop the Mohammed VI Tangier Tech City through providing all the necessary means to move forwards in the implementation of this project, said a statement issued by BMCE Bank of Africa.

Launched by King Mohammed VI in March 2017, Tangier Tech is a smart city, set to house over 200 Chinese companies that are expected to bring investments worth $10 bln, and to be a financial and industrial hub.

According to data released in March 2017, the new city, to be ready in 10 years, will include multiple industrial zones specializing in several sectors including aeronautics, automobiles, telecommunications, renewable energy, and transport equipment.

HAITE, the first Chinese group involved in the project, pulled out after having reportedly encountered a series of problems. Some press reports spoke of a disagreement between Morocco and the Chinese company over who would own the city. However, no official clarification was given by either side to explain why HAITE abandoned the project.