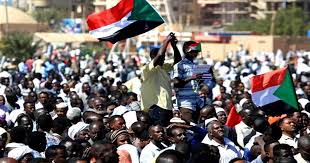 The resignations are yet to be confirmed by the council. The three are accused by the protesters who have been camping in front of the army compound since April 6, for participating in the crackdown of demonstrators during previous months of protests that led to the ouster of Bashir by the army early this month after 30 years of autocratic ruling.

The post-Bashir era has been tense as uprising leaders, the Sudanese Professionals’ Association (SPA) and the TMC have been embroiled in a deadlock over the swift transfer of power to a civilian transitional council.

After announcing Sunday an escalation in the protests over the TMC’s reluctance to surrender power, the SPA earlier on Wednesday scored points as the military council agreed to form a committee to resolve their disagreements.

“We are partners working together to bring Sudan to safety,” TMC spokesman Shams El Din Kabbashi said on state TV following a meeting with the umbrella group Forces of the Declaration of Freedom and Change, which includes the SPA.

The dialogue will also include the opposition groups.