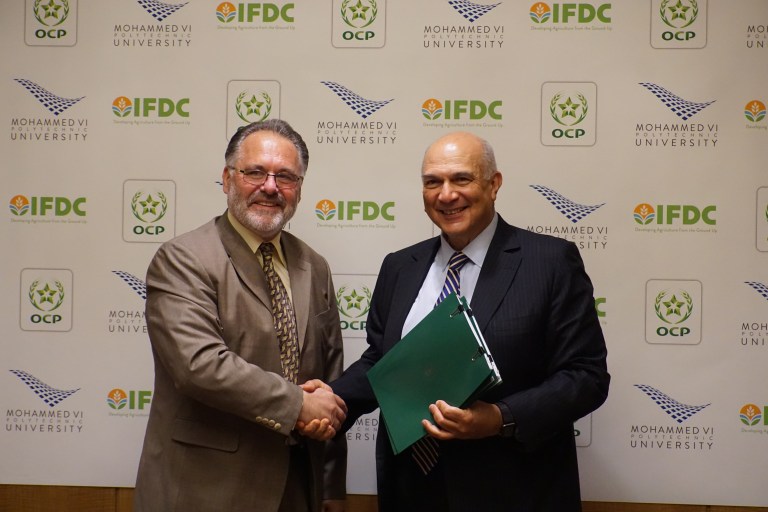 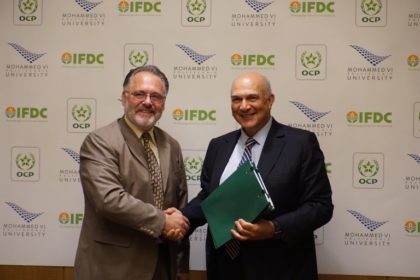 Morocco’s Office Chérifien des Phosphates (OCP) has sealed a multi-year partnership agreement with the International Fertilizer Development Center (IFDC), and the Mohammed VI Polytechnic University (UM6P) “to collaborate on the engineering of new fertilizer technologies, improvement of crop and soil specific fertilizer recommendations, development of value chains and market systems, and research and implementation of fertilizer systems to benefit African farmers”, said the institutions in a joint statement.

OCP, the world’s larger phosphates exporter, IFDC, and UM6P announced the partnership last week in Washington D.C during the signing of a master agreement between IFDC and OCP.

The master agreement outlined collaboration areas in which the OCP–UM6P–IFDC consortium will undertake projects with the ultimate aim of boosting African agriculture and farmer livelihoods through innovative fertilizers that meet the specific needs of the African soil and socio-economic conditions for sustainable development, the joint statement said.

Commenting on the partnership, OCP Chairman and CEO, Mostafa Terrab, said that “this important partnership with IFDC confirms and advances our ambition to mobilize world-class resources in research and innovation for the benefit of Africa in general, and African smallholder farmers in particular.”

President and CEO of IFDC Albin Hubscher said that the partnership will “accelerate the development and large-scale production of more efficient fertilizers to increase smallholder productivity and incomes while respecting the environment.” “The partnership is unique because it invests in a public good: the next generation of African scientists and professionals to drive the growth of the agriculture sector and feed the continent,” he said.

This new partnership will make use of the unique abilities of the consortium members to combine research and education with implementation under real life conditions. The collaboration will develop science-based interventions, produce a large body of scientific publications, and create the next generation of trans-disciplinary trained scientists who can bridge the gap between science and implementation.

In addition to the new partnership with UM6P and IFDC, Morocco’s OCP, which owns 75 percent of the world’s reserves in phosphates, concluded several other partnerships with international groups.

With almost a century of experience and revenues reaching US$ 5.95 billion in 2018, OCP Group is a leader in the phosphate rock and the world’s first producer of phosphate-based fertilizers. OCP provides a wide range of well-adapted fertilizer products to enhance soil, increase agricultural yields, and help feeding the planet in a sustainable and affordable way.

Committed to best serve the development of Africa, OCP places innovation at the heart of its strategy, in particular to implement sustainable and prosperous agriculture on the continent. As a responsible industrial player, OCP is strongly committed to Africa’s environmental, social and human development.

North Africa Post's news desk is composed of journalists and editors, who are constantly working to provide new and accurate stories to NAP readers.
NEWER POSTMorocco should prepare for a Deal with Britain before Brexit
OLDER POSTIMF Chief Hails Morocco’s Economic Performance