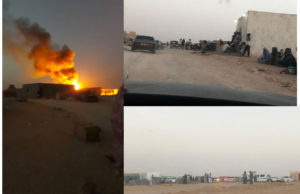 The violent clashes in the so-called “Smara” camp opposed Ahl Lahcen Ouhmad and Oulad Moussa factions of the Rguibat tribe.

According to concordant sources and videos relayed on social networks, the bloody clashes erupted following a dispute over ownership of a plot of land at the intersection of the Farcia and Jdayria “Daïrats” (a kind of constituency under the authority of a Pasha). The plot of land was sold by Algerian authorities to the two sides without any legal document.

Both sides used bladed weapons and gas cylinders in their clashes that left three people seriously burnt. A house was also burnt down.

According to sources quoted by the news website le360, four tents were also destroyed by fire and 33 people were arrested by the pseudo “police” of the polisario.

The clashes also left 17 wounded among the protagonists and 9 members of the pseudo “police”.

Over the past weeks, the Rabouni camp, hosting the Polisario headquarters, has been shaken by demonstrations, marches and sit-ins staged by hundreds of Sahrawis protesting against their appalling living conditions and restrictions to their freedom of movement decreed by the Algerian supervisory authorities, since February 22, the beginning of the popular demonstrations in Algeria against the long-ruling regime.