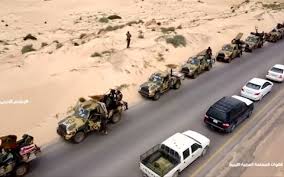 The governments of France, Italy, the United States, the United Kingdom as well as the United Arab Emirates have expressed deep concern over fighting in Libya and urged all parties to immediately de-escalate tensions, which are hindering prospects for UN political mediation.

In a joint statement issued Thursday, the five countries said at this sensitive moment in Libya’s transition, military posturing and threats of unilateral action only risk propelling Libya back toward chaos.

“We strongly believe that there is no military solution to the Libya conflict. Our governments oppose any military action in Libya and will hold accountable any Libyan faction that precipitates further civil conflict”, added the statement.

The five countries voiced their backing to UN Special Representative of the Secretary-General (SRSG) Ghassan Salame as the UN seeks to break Libya’s political deadlock, improve transitional governance, and chart a path toward credible and peaceful elections.

They called on all Libyan actors to work constructively with SRSG Salame as the UN finalizes plans for the national conference planned for April 14–16.

The UN Security Council will hold this Friday a closed-door emergency meeting on the situation in Libya after Commander of the Libyan National Army Khalifa Haftar ordered his troops to launch an offensive on Tripoli, vowing to liberate it from all illegal armed groups.

Prime Minister of Tripoli’s Government of National Accord Fayez al-Sarraj ordered all military units controlled by him to be on full combat alert, giving the green light to airstrikes in order to “defend the civilian population and crucial facilities.”

military movements. He is planning to meet with Field Marshal Khalifa Haftar on the situation in the country amid the army’s offensive against the capital.