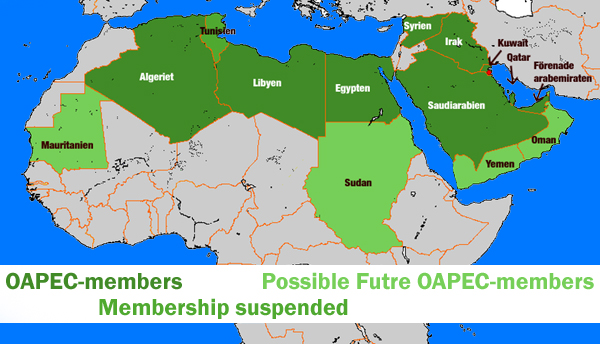 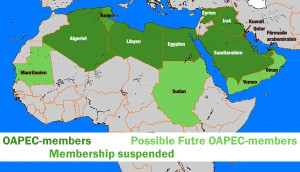 The 10th conference of the Organization of Arab Petroleum Exporting Countries (OAPEC) will be held Libya in 2014 to discuss several issues related to world oil market, the challenges facing Arab crude producing countries and ways to support Libya’s post-revolution development and reconstruction.
The conference, to look also into sustainable development of energy sources throughout the Arab world, will be held amid international projections expecting oil and its liquid derivatives to remain fairly high priced in the two coming years, while natural gas will continue to cheapen, deepening the gap between the two fuels.
OAPEC is an inter-governmental organization based in Kuwait that seeks to foster cooperation among the 11 Arab oil-exporting nations and develop their petroleum industry. It includes Kuwait, Libya, Saudi Arabia, Algeria, Bahrain, Egypt, Iraq, Qatar, Syria, Tunisia and the United Arab Emirates. It is a separate and distinct entity from OPEC (the Organization of the Petroleum Exporting Countries), the 12-nation cartel that plays a pivotal part in determining global petroleum prices.
Global oil demand growth is expected to accelerate this year, albeit slowly at first, as the global economic recovery gathers speed, while the risk of supply disruptions keeps growing since 2011 as the oil market remains heavily dependent on output from less politically stable producers such as Iraq and other countries from the region.
According to some energy analysts, OPEC supply is also expected to decrease by 0.4 million b/d in 2013 from 2012 before going up by 0.5 million b/d in 2014. For many crude experts, 2012 was a tough and challenging year for both oil producers and consumers due namely to geopolitical tensions, oil market speculations, a fragile financial and banking system, a slow economic recovery (despite bailouts, fiscal & monetary support), high unemployment and social unrest in a number of countries.
The Libyan oil sector is rebounding slowly from a bloody civil war and is currently producing around 1.6 million barrels per day, its pre-war level. The new Libyan authorities hope to reach a production level of around 2 million barrels of oil per day in three to five years.
Libya, which holds Africa’s largest oil reserves of 46 billion barrels, has the potential to become an energy or petrochemical hub, but is still struggling to impose its authority in some areas controlled by armed groups.
The North-African country, an OPEC member, woos foreign investors to its energy sector and seeks by all means to increase oil output to raise funds for its development and reconstruction projects.