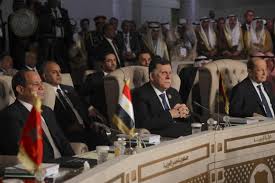 Addressing the 30th summit of the Arab League, in Tunis, Faiez Serraj without mentioning them, took aim at Khalifa Haftar and his ally administration in Beida for wanting to establish a military regime in the North African country.

“The militarization of the state is a red line and we will not allow it to happen,” Serraj stressed.

Libya currently have two different administrations: the Serraj-led Government of National Accord (GNA) and the Beida-based rival government supported by Haftar and his LNA.

The LNA, which occupies most of the eastern part of the country had recently conducted several operations in the southern regions to “flash out gangs and terrorist groups” it said. The operations however have been viewed as part of Haftar’s plans to take control of the country.

The division and lawlessness have plagued UN efforts to support the re-construction of the oil-rich country following the removal of longtime ruler Muammar Gaddafi in 2011 in a NATO-backed revolution.

The UN announced last month a reconciliation forum for this April 14-16. The forum, meant to pave the way for presidential and parliamentarian elections, will be attended by 120 to 150 delegates, according to UN envoy Ghassan Salame.

The forum will be followed in July by another reconciliation summit under the auspices of the African Union (AU).

The summit was announced by AU commission chief Moussa Faki late Saturday, following a meeting on Libya on the sidelines of the Arab League Summit.

“It’s high time that the (political) actors discuss the fate of their country,” Faki was quoted by the media as saying.