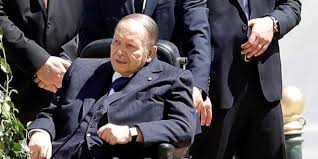 Algeria: Is Bouteflika stepping down Tuesday?

President Abdelaziz Bouteflika might step down from power Tuesday, April 2, two days after he named a caretaker government that will lead the country through transition.

The move by the Algerian leader according to Ennahar is in line with article 102 of the constitution that empowers the constitutional council to declare the president unfit to run the country’s affairs or that allows the leader himself to step down.

As the boat of the Algerian regime sinks against the backdrop of unrelenting protests demanding a step down of infirm Bouteflika, in power since 1999, and a departure of the opaque regime, the ruling elites, seeking to address the wrath of the people standing against the extension of President Bouteflika’s term, proceeded to the appointment of a new cabinet.

Yet, shortly after the announcement, protesters took to the streets Sunday evening demanding a genuine reform of the opaque regime perceived as undemocratic, corrupt and inefficient and rejecting the cabinet lineup, which keeps the powerful army Chief of staff, Lieutenant General Ahmed Gaed Salah, Deputy Minister of Defense. It is the second position in the protocol order, behind Prime Minister Noureddine Bedoui.

The defense portfolio is held by Bouteflika himself, constitutionally supreme commander of the armed forces.

Actually, it was Ahmed Gaïd Salah who first suggested last week the implementation of article 102 to declare Bouteflika unfit to rule, in a bid to get out of the crisis born of the growing demand by tens of thousands of Algerians, at home and abroad, for a regime change. He reportedly renewed the call on Saturday.

Should Bouteflika step down, Abdelkader Bensalah, the head of the constitutional council would take over as caretaker President for 90-day transition with elections as climax.