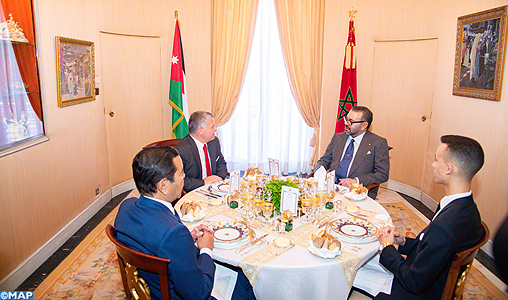 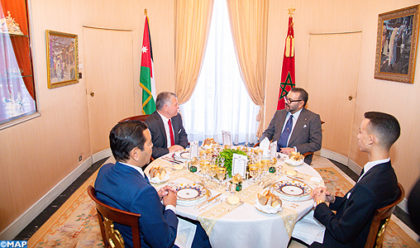 King Mohammed VI, Chairman of Al-Quds Committee, and King Abdullah II of Jordan have reiterated their full support to the Palestinian people for the recovery of all their legitimate rights, including their right to statehood.

This came in the joint statement issued at the end of the working and friendship visit King Abdullah II paid to Morocco on March 27-28 at the invitation of King Mohammed VI.

The two leaders have renewed their unwavering backing to the Palestinians’ right to establish their independent Palestinian State, within the borders of 4 June 1967, with Eastern Al-Quds as its capital, on the basis of the relevant international resolutions, the Arab Peace Initiative and the principle of the two-State solution.

The two Sovereigns also reaffirmed their rejection of all unilateral measures taken by Israel, as an occupying force, to change the legal and historical status of Al Quds, or its demographic, spiritual and historical character, particularly with regard to Islamic and Christian sacred sites in the holy city.

In this connection, King Mohammed VI stressed the importance of the historical Hashemite guardianship over the Islamic and Christian holy sites in Al-Quds Asharif and its main role in the protection of these sacred sites and their Arab-Islamic and Christian identity, and more particularly the Al Aqsa Mosque. The Sovereign also underlined the important role of the Jordanian administration of the Waqf and of the Al Aqsa Mosque, as the sole legal authority on Al Haram, which manages, maintains and preserves it and organizes access to the Mosque, says the statement.

For his part, King Abdullah II commended the continued efforts made by the Chairman of the Al-Quds Committee, to support the Holy City. He praised the development projects and programs implemented by Bayt Mal Al Quds Asharif Agency, as well as the agency’s backing to the resistance of the inhabitants of the holy city.

The two leaders who discussed at their meeting other topical Arab issues, stressed the need to end the Syrian crisis through a political solution that would preserve Syria’s unity and cohesion, restore its security and stability and its role in the joint Arab action.

Regarding Iraq, the two leaders lauded the victory achieved by this country, due to great sacrifice, over the terrorist organization “Daech”, expressing Morocco’s and Jordan’s support for the reconstruction of Iraq and the consolidation of its stability.

At the bilateral level, the two Kings decided to upgrade the fraternal and cooperation relations between Morocco and Jordan to the level of a multidimensional strategic partnership, and convened to this end to implement concrete projects in areas such as energy, agriculture and tourism.

The two heads of State also agreed that a Moroccan economic mission, including representatives of Morocco’s Employers Association (CGEM) and the professional Group of Moroccan Banks (GPBM), would visit Jordan to explore investment and cooperation opportunities between the two countries’ private sectors.

The joint statement also announced that King Mohammed VI has given his high instructions for the establishment of a vocational training/qualification center in Jordan. The center will provide training in tourism, agro-industry, construction and water resources management.