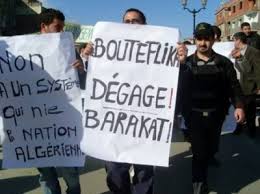 It is clear that the ailing and embattled president Abdelaziz Bouteflika has not been able to deflate mass demonstrations or convince angry protesters demanding his departure, change, inclusive growth and democracy.

After weeks of popular protests, Mr. Bouteflika, 82, announced on Monday that he would not run for a fifth term and postponed elections scheduled for April 18th to allow for consultation on reforms “for a new generation”, promising to leave “a new republic”.

Algerians reacted with a mixture of relief and anger at Bouteflika’s surprising political decisions, announced upon his return to his country of 41 million after spending two weeks in a Swiss hospital.
He said he would not seek re-election but would remain in charge while a revised constitution is drafted.

The long-time president has ruled the gas-oil rich country for 20 years. A stroke in 2013 left him confined to a wheelchair. He has rarely spoken in public since. Yet he was intending to seek a fifth term.
His decision to drop his re-election bid was welcomed by some protesters, but many remain dubious saying that the move to postpone the presidential election is simply a maneuver to extend his fourth term beyond the legal and constitutional limits.

Shortly after the President’s announcement, the Arabic hashtag ‘leave means leave’ began trending on Twitter. Protesters have said they will not leave the streets until the government, and all those in the tiny elite of military officers, veterans and big businessmen dubbed “Le Pouvoir”, have handed over power.

Algerians are actually concerned over their country’s future and wondering what will happen next after the incumbent president decided to remain in power, a move that is constitutionally questionable, and carried out a minor cabinet reshuffle with figures of his own “Le Pouvoir”. This was viewed as a way to maintain the status quo.

In its front page, Algerian El Watan daily published on Tuesday a story entitled “Bouteflika’s last ruse” to stay in office, a title that reflects and translates perfectly the mood of the Algerian people. They are rejecting their country’s political system dominated for nearly 60 years by the veterans of the independence war against France.

Therefore it is no surprise if thousands of young Algerians of all walks of life continue to demonstrate on the streets in Algiers and in several other cities. They represent a wide cross-section of society including students, teachers, lawyers, and the working class.

The protestors want change as the economic and political situation stalled for decades. They are frustrated by a lack of economic opportunity and the corruption of an opaque political & military elite that has governed the country since independence.

The unemployment rate in the country stands at approximately 12 percent and more than a quarter of Algerians under the age of 30 are jobless.

Sharp rises in the price of basic items such as sugar, oil and flour have also hit Algerians hard, with increases of between 20 and 30 percent seen in the first few months of 2019 alone.

What began as protests against president Bouteflika’s bid for a fifth term has quickly turned into a popular opposition to the Algerian regime which started showing some cracks.

It seems that the pressure exerted by protestors is building up. They will remain mobilized until their political demands are fulfilled.

But, now social handouts have run out, leaving the government with little choices, while the legitimate socioeconomic woes are mounting.

In the past, the Algerian authorities have managed the burgeoning social discontents with a stick-and-carrot policy but this policy is no longer working and Bouteflika’s deciqsion to withdraw from the presidential race is just a “half victory” for the protesters who want a regime change. No less.