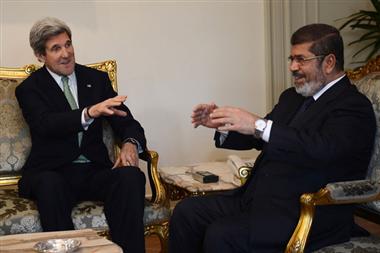 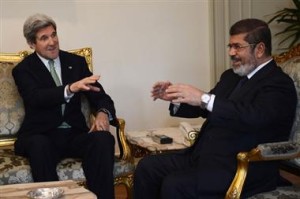 The U.S.A has released a quarter of a billion dollar in economic aid to Egypt and has pledged more if Egypt implements economic and political reforms.U.S. Secretary of State John Kerry described the gesture as a “good-faith effort.”

After holding meetings in Cairo during the weekend, Kerry said the United States would provide the first $190 million of $450 million in already-promised support funds to the Egyptian government budget. The other $60 million will be in the form of a direct support for an Egyptian-American Enterprise Fund geared toward Egypt’s entrepreneurs and fund a higher-education initiative to help students, especially women, earn undergraduate degrees in science, technology, engineering and business.
The US is hoping that President Morsi will uphold his assurances, strengthen the country’s economy, build political unity and justice to receive more aid from them and obtain IMF’s loan package. It wants “homegrown” reforms to be implemented by the government to help secure agreement with the IMF and “put Egypt on the path to establishing a firm economic foundation and allow it to chart its own course.”
Kerry called on the Egyptians to unite and “address their economic challenge” as he reminded them that “the brave Egyptians who stood vigil in Tahir Square did not risk their lives to see that opportunity for a brighter future squandered.” He admitted that “more hard work and compromise will be required” to bring back the country on its feet and considers the upcoming parliamentary elections to be “a particularly critical step in Egypt’s democratic transition.”

Although Kerry stated that president Morsi has agreed to “move quickly” in implementing reforms, the U.S are not ready yet to release all of the $1 billion the Obama administration pledged to Egypt in May 2011, after the revolution.