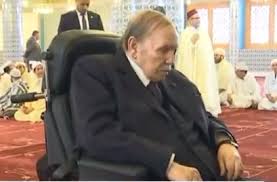 Infirm Algerian President Bouteflika, who applied to run for a fifth term from a hospital in Geneva, is facing a permanent threat to life, his Swiss doctors told the media.

A medical source speaking anonymously told Swiss paper La Tribune that the president is facing a permanent risk of lung infection due to his frail health.

“The President is an old man who did not recover from the stroke he endured in 2013,” the source added.

Bouteflika flew to Geneva late last month amid protests in his home country calling on him to step down.

“In three years, his condition deteriorated starkly from a state of vulnerability allowing a sort of normal life to a serious state requiring continuous care,” the Swiss paper reported.

Bouteflika is unable to speak intelligibly although he understands what is being said to him, the medical source said.

The ailing President, or the people speaking on his behalf commonly known as le Pouvoir, defied popular protests by submitting candidacy for the Presidential elections while promising to step down after less than a year for early elections.

The proposal further ignited the anger of the protesters across the country where clashes have erupted with the Police.