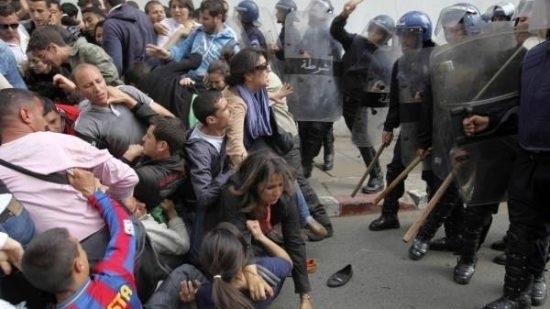 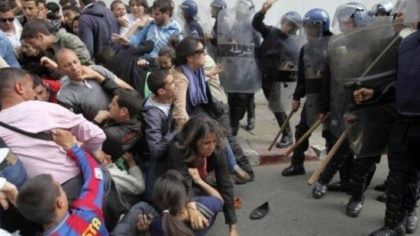 Thousands took to the streets of Algeria on Friday to vent their anger at the perceived disrespect shown to them by the ruling elites as they prepare for a fifth term for ailing President Abdelaziz Bouteflika.

Algerian society is in ferment since February 10, following the announcement of Bouteflika’s controversial bid for a fifth term.

The peak of this popular anger was recorded Friday, March 2, when hundreds of thousands of Algerians took to the Algerian streets, including and especially down town Algiers, despite the ban on demonstrations in the capital city, to demand not only the departure of Bouteflika but of all the symbols of the Algerian bedridden and corrupt regime.

In response to the growing momentum, authorities used tear gas to disperse thousands in the capital. Many were arrested and a demonstrator was killed.

Ironically, this first victim of the brutal intervention of the riot police against demonstrators in Algiers, is none other than the son of the second president of the Provisional Government of the Algerian Republic (GPRA), during the Algerian independence war, Benyoucef Benkhedda. All a symbol!

The sad news was announced this Saturday morning by the brother of the victim, Hassan Benkhadda.

“This is how my brother Hassan, a martyr of the revolt of freedom and dignity, was killed after performing Al Asr prayer on one of the alleyways in the center of Algiers, near the palace of the government,” said the brother of the deceased.

Hassan Benkhadda is to be buried this Saturday afternoon at the Martyrs Cemetery in Algiers, at the side of his late father, one of the heroic fighters for the Algerian people’s freedom and dignity.

However, authorities invoked the Syrian chaos and the bloody decade suffered by Algeria during the civil war in the 1990s in a bid to thwart protesters from taking to the streets.

Officials are toughening rhetoric with chief of staff Ahmed Gaid Salah warning in televised remarks that “some Algerians have pushed towards the unknown through dubious appeals manifested in a mockery of democracy”.

Analysts see that it will be difficult for the regime to buy social peace as it did in 2011 through wage hikes and increase in subsidies to basic goods to quell protests.