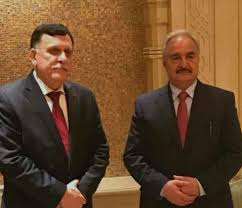 Libya’s main rivals have agreed to hold elections in a bid to preserve stability in the country and unify institutions, the UN said.

The two sides agreed “on the need to end the transitional phase through general elections and on ways to preserve the stability of #Libya and unify its institutions,” the UNSMIL tweeted.

Libya has been without a central government since the overthrow of Muammar Gaddafi in a NATO-backed revolution in 2011.

The UN has been pushing for several years to end chaos in the North African country but the efforts have hit a buffer.

In May last year, Serraj and Haftar, met in Paris under the auspices of President Emmanuel Macron of France and agreed to hold elections in December 2018 but the plan failed. The difference between the two stakeholders became more significant after Haftar’s forces launched in December a military operation in the south of the country. The offensive supposed to get rid of terror and gang groups is seen within the PC as a covert power grab.

In November, at the Palermo conference held as part of Italy’s efforts to snatch an agreement for elections, Haftar refused to attend the main conference and held separate talks with envoys from foreign countries.

At their meeting in the UAE, the two rivals did not set any date for the elections.