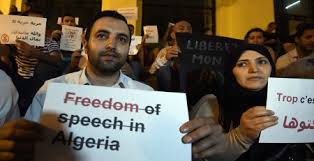 Amnesty International has denounced the lack of freedom of expression, peaceful assembly and association in Algeria, deploring the arbitrary arrest and detention of journalists and activists.

In its annual review of the situation of Human rights in the MENA region, AI said the Algerian authorities maintained a de facto ban on protests in the capital, using excessive force to disperse peaceful demonstrations across the country.

According to the human rights Watchdog, the Algerian regime continued to use Penal Code provisions to stifle freedom of expression. At least seven journalists and six activists were arrested and detained under such provisions. In some cases, they were tried, convicted and even sentenced to prison terms.

Between May 31 and June 1, journalists Khelaf Benhadda, Said Boudour and Adlène Mellah and whistle-blower Noureddine Tounsi were arrested for “insulting institutions” and “undermining national unity” after they covered a corruption scandal in the city of Oran.

The Algerian authorities kept many associations in legal limbo by failing to respond to registration applications submitted as required by the highly restrictive Associations Law, said Amnesty International in its report on Algeria.

Members of the Ahmadi religious movement in Algeria continue to suffer persecution because of their beliefs, subjecting dozens of them to trial or investigation, as well as confiscating the passports of some of them, said AI.

Amnesty also slammed the Algerian regime for its continued crackdown on sub-Saharan migrants that began in August 2017, subjecting several thousands of them to arbitrary arrest, detention, forcible transfer to the far south of Algeria and expulsion to neighboring countries.

In 2018, over 12,000 nationals of Niger and more than 600 nationals from other sub-Saharan African countries, including regular migrants, refugees and asylum-seekers, were summarily expelled to neighboring Niger, in blatant violation of international law.

The Algerian authorities forcibly transported over 11,000 nationals of sub-Saharan African countries to the border with Niger and left them there and took similar action against more than 3,000 others whom they left at the border with Mali. In some cases, the security forces compelled migrants at gunpoint to walk through the desert to cross the borders.

According to UNHCR in Algeria, on 26 December, the Algerian authorities deported at least 100 Syrian, Yemeni and Palestinian nationals to the border with Niger and left them stranded in the desert. These included several registered refugees and asylum-seekers who had previously been detained in Tamanrasset.