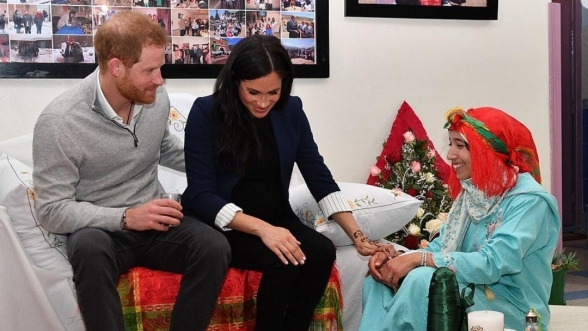 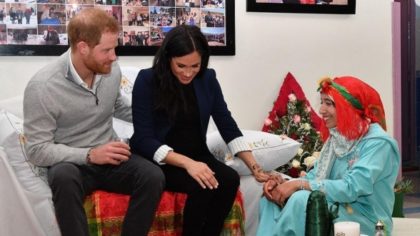 After they were greeted Saturday evening in Rabat by Crown Prince Moulay El Hassan, the Duke and Duchess of Sussex made a trip Sunday to Asni in the Atlas Mountains where they met rural girls from the region.

The British royal couple met young girls at “Dar Asni 1”, the first boarding school set-up by the NGO Education for All in the small town near Marrakech.

They also visited “Dar Asni 3”, another boarding school run by Education for All that hosts girls aged between 8 and 12 years.

On this occasion, Prince Harry rewarded Michael McHugo, founder of Education for All, with the MBE order (Member of the Most Excellent Order of the British Empire) for his efforts to promote gender equality in Morocco.

The Duke and Duchess of Sussex “will see work being done to promote girl’s education, empower young people and support children from disadvantaged backgrounds”, Kensington Palace had said when announcing the visit to Morocco.

In Asni, Princess Meghan had her hand decorated with Henna at a henna ceremony and met alongside her husband students and teachers of a high school, Le Lycée Qualifiant Grand Atlas. They attended afterwards a football match played by two mixed teams of the high school.

On this occasion, British ambassador to Morocco, Thomas Reilly, announced that sport equipment will be donated to the school.

Founder of Education for All Mike McHugo told Reuters that the Royal couple’s visit “is a good news for the people of the area after such a tragic and isolated incident,” referring to the terror attack that took the lives of two Scandinavian tourists in the neighboring town of Imlil last December.

On Monday, the Duke and Duchess of Sussex will meet children with special needs, attend a Moroccan cuisine cooking demo and a traditional Moroccan arts and crafts display as well as a horse-grooming session at an equestrian facility, before flying back to London.