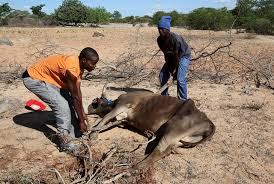 Zimbabwe will need $7 billion by 2030 to cope with the effects of global warming, Washington Zhakata, the director of the water management and climate change at the Ministry of lands and Agriculture, told local media.

Zhakata explained that these funds will initially be used to reorient the energy sector towards more environmentally friendly sources of electricity such as hydroelectricity and solar energy while reducing the need for new thermal power plants.

According to the country’s submissions to the UN Framework Convention on Climate Change, most of Zimbabwe’s climate-changing emissions comes from burning fossil fuels for energy, from agricultural production, and from waste handling and industrial processes.

Last year the government has released a trio of climate change policies designed to make the country more resistant to climate pressures and help it meet its international carbon-cutting pledges.

The new climate change policy aims to help cut emissions by industry, energy producers, agriculture and deforestation, among other sources.

The government has said it intends to establish a National Climate Fund that would use 10% of the national budget to finance action on adapting to climate change and curbing emissions.

As a reminder, rainfall has declined nearly 5% across Zimbabwe during the past century, according to a report on climate change from the Zimbabwean government and the United Nations Development Program last year.