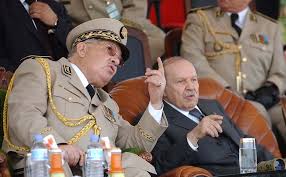 Thirteen high ranking military officers have been arrested in Algeria at the orders of the army chief of staff Gaid Salah over alleged contact and support for retired army general Ali Ghediri who became last month the first figure in the country to announce his plans to run for April 2019 presidential elections.

Local media El Watan citing a source who did not want to be named because not allowed to speak on the issue said the detainees include colonels and lieutenant-colonels.
The arrest orders came from Salah, the top Algerian army commander.

The detainees according to the source are accused of breaching a January 24 warning by the army to officers, to avoid involvement into politics or to back any candidate for the April presidential poll.

The 13 officers allegedly called Ghediri and vowed their endorsement for his plans to seek the top job, the source noted.

The 65-year old man is viewed as the main challenger for President Abdelaziz Bouteflika who is yet to bid for the race.

The army also accuses Ghediri of having ties with Mohamed Mediene, aka Toufik, who headed for several decades the country’s powerful spy agency.

Bouteflika, who also heads the defense ministry, sent Toufik on retirement in 2015.