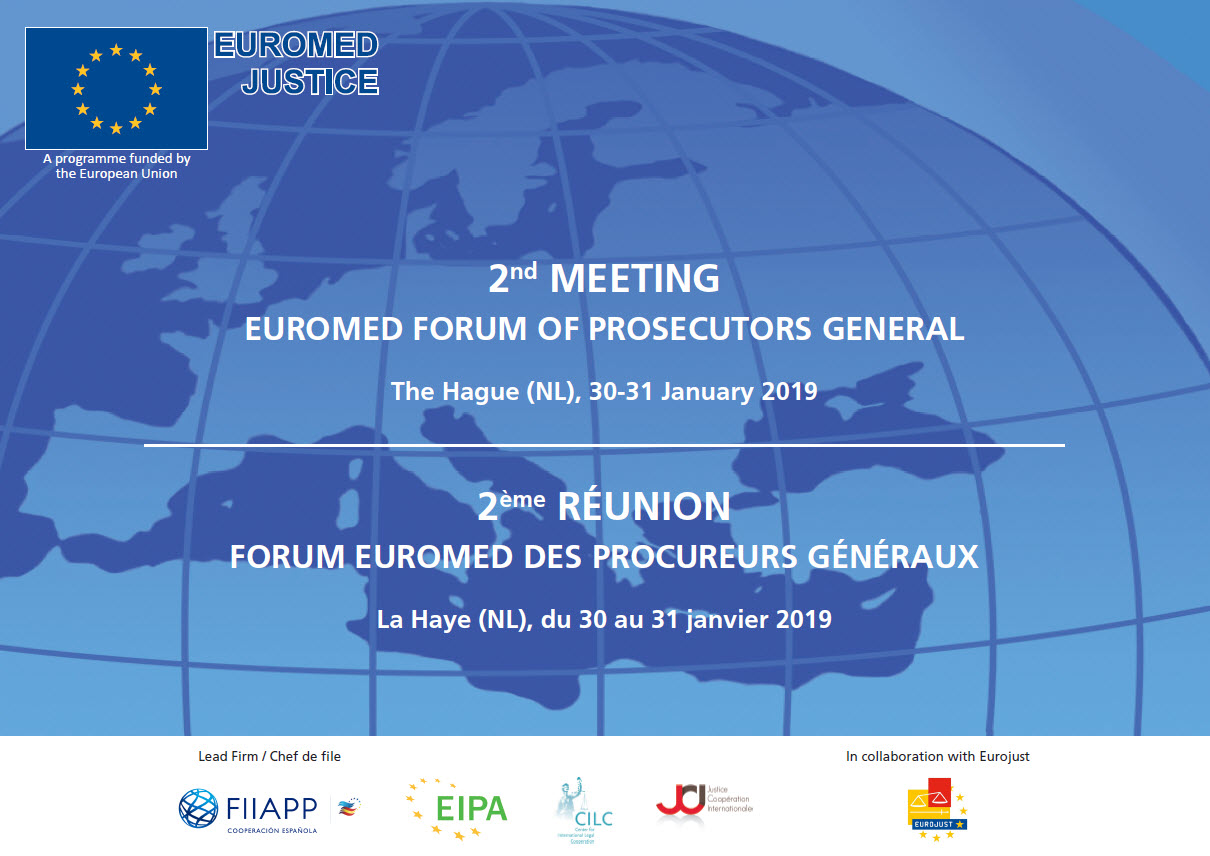 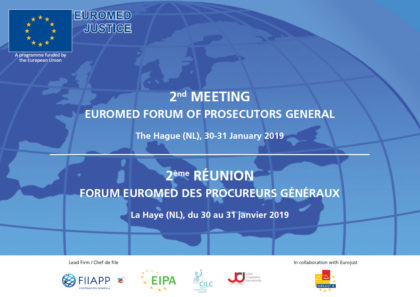 Prosecutors General from Europe and Mediterranean countries (Algeria, Egypt, Israel, Jordan, Lebanon, Morocco, the Palestinian Authority, and Tunisia) agreed on the Guiding Principles of the EuroMed Forum of Prosecutors General setting up the main objectives and principles of collaboration, communication and continuation of the Forum with the objective of improving international judicial cooperation.

The agreement of the Guiding Principles of cross-regional collaboration took place this week under the impetus of EuroMed Justice, the program financed by the European Commission for judicial cooperation between the countries of Europe and the Mediterranean.

This second Forum, promoted by and held at Eurojust’s premises, and following the cornerstone laid by the Spanish Prosecutor’s Office last year in Madrid, was well received and welcomed by the Prosecutors General from the participating countries.

The Forum allowed the Prosecutors General to share experience and best practice on issues related to cyberspace and judicial cooperation in criminal matters; personal data protection and cooperation with third countries; joint investigation teams; and countering terrorism and organized crime, particularly smuggling of illegal migrants and trafficking in human beings and drugs in the Euro-Mediterranean region.

The President of Eurojust, Mr Ladislav Hamran, said: “At Eurojust, we have long realized that judicial cooperation should not stop at the borders of Europe. Bringing together colleagues from different continents, networks and organizations is exactly what Eurojust stands for. We are all united in our ambition to ensure justice for our citizens. Eurojust strongly welcomes the initiative of this Forum of Prosecutors General.”

EuroMed Justice IV (2016-2019) is an EU-funded project that contributes to the development of a Euro-Mediterranean area of cooperation in the field of justice and the development of effective, efficient and democratic justice systems that protect and promote human rights.

Started in 2004, the EuroMed Justice Project is managed by a consortium led by the Fundación Internacional y para Iberoamérica de Administración y Políticas Publicas – FIIAPP (Spain) with its partners from the Center for International Legal Cooperation – CILC (the Netherlands), the European Institute of Public Administration – EIPA (the Netherlands) and Justice Coopération Internationale – JCI (France).

Eurojust is the European Union’s Judicial Cooperation Unit, established in 2002 to stimulate and improve the coordination of investigations and prosecutions and the cooperation between the competent authorities of the Member States in relation to serious cross-border crime. At the request of a Member State, Eurojust may also assist investigations and prosecutions concerning a particular Member State and a non-Member State if a cooperation agreement has been signed or an essential interest in providing such assistance is present.

The main crime types dealt with by Eurojust are fraud, drug trafficking and money laundering. Eurojust has also stepped up its activities in fighting terrorism, cybercrime, migrant smuggling and trafficking in human beings.