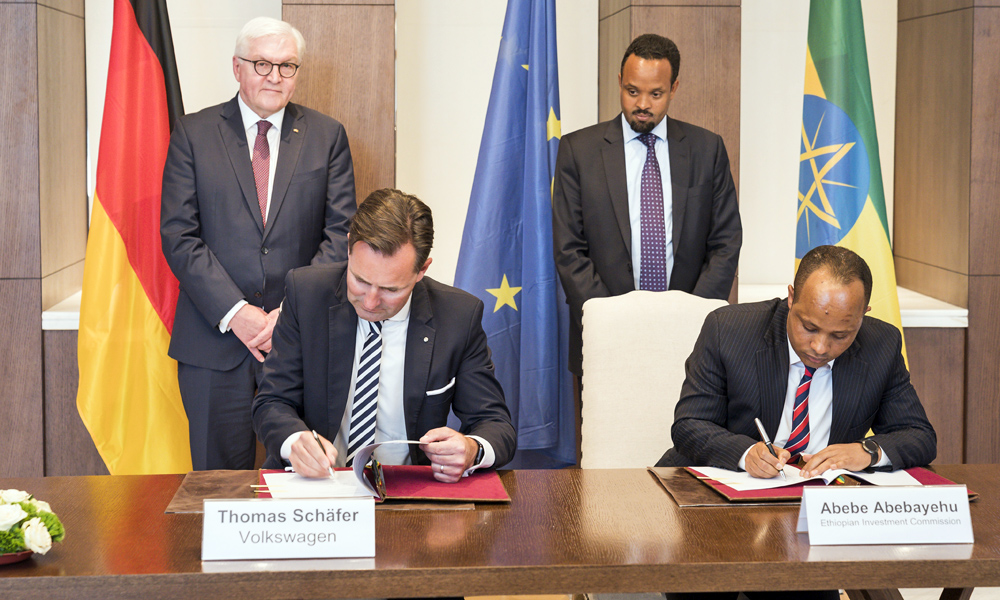 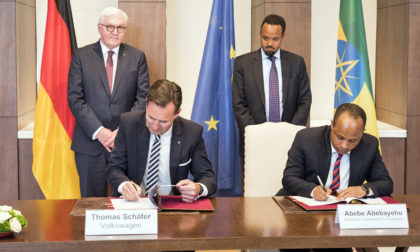 After Kenya and Rwanda, the German car giant Volkswagen continues its expansion plan in East Africa.

A Memorandum of Understanding (MoU) was signed on Monday by Thomas Schaefer, Head of the Volkswagen Sub-Saharan Africa Region, and the Commissioner of the Ethiopian Investment Commission (EIC), Abebe Abebayehu to deliver a joint vision for the development of “a sustainable, vertically integrated & export-oriented automotive industry” in the Horn of Africa nation.

According to the MoU, Volkswagen will focus on four key pillars: the establishment of a vehicle assembly facility, localization of automotive components, introduction of mobility concepts such as app-based car sharing and ride hailing as well as the opening of a training centre.

“As one of the fastest growing economies, and with the second highest population in the continent, Ethiopia is an ideal country to advance our Sub-Sahara Africa development strategy,” said Thomas Schaefer, Head of the Volkswagen Sub-Sahara Africa Region.

Volkswagen, shortened to VW, is a German automaker founded in May 1937 by the German Labor Front and headquartered in Wolfsburg. It was the largest automaker by worldwide sales in 2016.

The company signed a Memorandum of Understanding with Volkswagen Ghana and Nigeria in August 2018.

North Africa Post's news desk is composed of journalists and editors, who are constantly working to provide new and accurate stories to NAP readers.
NEWER POSTOil and Gas: African countries to raise $2 billion for energy projects
OLDER POSTS&P Expects Morocco’s Economy to Grow By 4.1% in 2020-2021