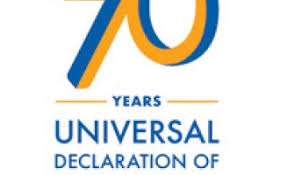 King Mohammed VI of Morocco has deplored the increasing inequalities and discrimination prevailing in the world and the ‘clash of ignorances’ that continues to engender intolerance, extremism and radicalism.

The celebration this December of the 70th anniversary of the adoption of the Universal Declaration of Human Rights comes at a time when humanity is facing challenges of global magnitude and unprecedented scope, said King Mohammed VI in a message to a meeting held in Rabat Thursday to mark this anniversary.

“In addition to the inequality issue, there is increasing discrimination. The ‘clash of ignorances’ continues to engender intolerance, extremism and radicalism, just as climate change and migration flows pose new challenges in terms of economic, social and cultural rights,” the Monarch said in the message read out by Royal Adviser Abdeltif Menouni.

Since the adoption of the Universal Declaration of Human Rights, international human rights law has continued to develop as increasingly sophisticated pacts have been adopted, despite frequently unfavorable conditions. “However, in many parts of the world, these positive developments unfortunately come up against devastating conflicts, violent extremism, inward-looking tendencies, rejection of the other and intolerance,” he noted.

At the same time, he said, new challenges are emerging and require appropriate responses.

Part of these new challenges, the king mentioned in particular the effectiveness of economic, social, cultural and environmental rights, the fight against discrimination – especially that affecting women – the empowerment and inclusion of young people, the protection of the rights of vulnerable groups – particularly children and persons with disabilities – and, of course, the reduction of social inequalities and regional disparities.

Answers to these challenges must be based on a clear frame of reference and should be inspired by the fundamental values enshrined in the Universal Declaration of Human Rights, the King said, citing in this regard the example of the Global Compact for Safe, Orderly and Regular Migration adopted in Marrakesh on Dec.10.

The compact “puts the respect, protection and achievement of migrants’ basic rights at the heart of the new migration governance system,” the King said, adding that “based on international human rights law, the Compact reiterates the universal and indivisible nature of human rights. It is grounded in the firm belief that migration cannot be safe, orderly and regular if migrants’ rights are not rigorously respected – regardless of their status.”

Reiterating Morocco’s unwavering commitment to the elimination of all forms of discrimination against migrants, King Mohammed VI recalled that the Kingdom has put the human element at the center of its migration policy.

Morocco has thus developed a humane, balanced and solidarity-based migration policy, which cares about the well-being of migrants and encourages their long-lasting integration into Moroccan society. “We shall continue to work tirelessly to promote the culture of human rights, to ensure respect for all rights and to see that everyone complies fully with his or her obligations towards others, society and the nation,” the Monarch pledged.

The King also reaffirmed the Kingdom’s commitment to multilateralism which is rooted in solidarity among peoples, the pursuit of peace and belief in the universal nature of rights, underlining that universal values acquire greater legitimacy when they represent and protect human diversity, and when all peoples and cultures contribute to shaping them, ultimately considering them as their own.