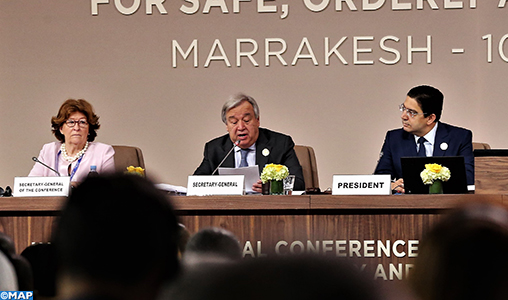 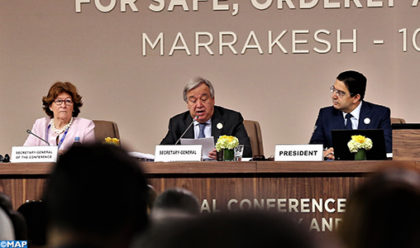 he Global Compact for Safe, Orderly and Regular Migration was formally adopted this Monday (Dec.10) at the intergovernmental conference on the global compact for migration held in Marrakech.

“This moment is the product of effort,” UN Secretary-General Antonio Guterres said at the opening of the debate. “We must not succumb to fear or false narratives” about migration, he said, denouncing the “many lies” spread on this agreement, which must now be the subject of a final vote of ratification, December 19 at the UN General Assembly.

The Pact aims to strengthen “cooperation on international migration in all their aspects”. The sensitivity of the subject has pushed several countries in the world to deny their commitments in favor of this text yet “legally non-binding,” he noted.

The UN Chief underlined the importance of this Compact as a roadmap to prevent suffering and chaos, and to provide cooperation strategies that will benefit all.

It is a framework for international cooperation, rooted in an inter-governmental process of negotiation in good faith, that specifically reaffirms the principle of State sovereignty, including “the sovereign right of States to determine their national migration policy and their prerogative to govern migration within their jurisdiction, in conformity with international law,” he pointed out.

Unregulated migration bears a terrible human cost: a cost in lives lost on perilous journeys across deserts, oceans and rivers; and a cost in lives ruined at the hands of smugglers, unscrupulous employers and other predators, Guterres underlined, noting that more than 60,000 migrants have died on the move since the year 2000, which is a source of “collective shame.”

The opening session was marked by the election of Minister of Foreign Affairs and International Cooperation, Nasser Bourita, as President of this Conference.
Speaking on this occasion, Bourita highlighted the huge efforts made by Morocco to reach a global consensus on the issue of migration.

This historic conference is the result of a long process that began in 2016 with the adoption by the United Nations of the New York Declaration for Refugees and Migrants, he said.
The pact, which is about 40 pages long, “promotes international cooperation on migration between all relevant actors, knowing that no single state can handle the issue of migration alone”. It “respects the sovereignty of States and the obligations of international law”.

“Migration undeniably has very different and sometimes unpredictable repercussions on our countries as well as on communities and migrants and their families”. Yet, “it is crucial that we do not allow ourselves to be divided and that we remain united in the face of the challenges and opportunities of international migration,” the document states.

“Through this comprehensive approach, we intend to facilitate safe, orderly and regular migration, while reducing the incidence and negative impact of irregular migration through international cooperation and the package of measures proposed in this Global Compact.”

“Migration should never be a desperate act, and when it does, we need to work together to meet the needs of vulnerable migrants and to solve the problems that lie ahead, enabling communities and individuals to live safely and with dignity in their own country,” the document outlines.

“We will implement the Global Compact by cooperating bilaterally, regionally and multilaterally and by giving a new impetus to the global partnership, in a spirit of solidarity,” says the text.

“We are building on existing initiatives to create a capacity building mechanism within the UN system whose role will be to support Member States’ efforts to implement the Global Compact.”

Signatories also commit to creating “a global platform of knowledge that will serve as a public online source of data” on migration, as well as a “United Nations network on migration” entrusted to the International Organization for Migration.

Some 150 countries are taking part in the two-day intergovernmental Conference.