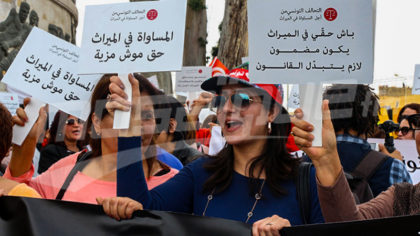 Despite the strong resistance of the Islamist movements in Tunisia, the cabinet approved last Friday a draft law that provides for equal inheritance rights for women.

The Council of Ministers in Tunisia on Friday decided to send a draft law to parliament that would give male and female heirs automatic and full equality, unless there is an explicit objection in the will of the deceased.

The High Commissioner for Human Rights Michelle Bachelet on Tuesday warmly welcomed the move as a significant step towards gender equality in the country, and sets an example for the region.

“I warmly welcome this significant move to secure equal rights for women and men in Tunisia,” High Commissioner Bachelet said, insisting that “to grant women equal inheritance rights is to empower them and to ensure protection of their economic and social rights.”

“In many ways, Tunisia sets an example for other countries in the region. Over the past few years, we have seen the Tunisian parliament reform a number of laws to bring them in line with the commitment to human rights, equality and non-discrimination enshrined in its Constitution and its ratification of international human rights treaties.”

The High Commissioner cited World Bank data from 2018 indicating that in 36 out of 189 economies, widows are not granted the same inheritance rights as widowers. In 39 economies, daughters are prevented from inheriting the same proportion of assets as sons.

“Unequal inheritance rights can mean that women are left even more vulnerable in an already difficult phase of their lives, following the loss of a loved one,” she said. “It can leave them exposed to dependence on the goodwill of male relatives and limits their ability to make decisions for themselves and their family.”

The UN Committee on the Elimination of Discrimination Against Women has recommended that States parties provide “explicit constitutional protection for formal and substantive equality and non-discrimination in the public and private spheres, including all matters of personal status, family, marriage and inheritance law, and across all areas of law.”