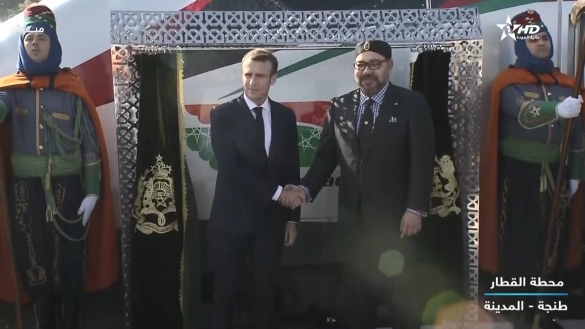 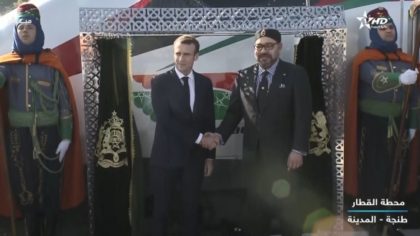 King Mohammed VI of Morocco and French President Emmanuel Macron were the first passengers to board Thursday the brand new Moroccan high-speed train at the revamped railway station in Tangier.

The two heads of state have made a journey to Rabat aboard the TGV, baptized “Al Boraq”, inaugurating thus Africa’s first high-speed train, a landmark achievement, which reflects the sound Moroccan-French friendship and gives the example of the “win-win” North-South partnership.

The TGV project, launched in 2007 following the deal sealed in Morocco during a visit paid by the then French President Nicolas Sarkozy, will halve the travel time between Casablanca and Tangier to 2 hours 10 minutes compared to 4 hours 45min by a regular train.

President Macron was accompanied by the heads of the French companies that were involved in carrying out the project. These include Alstom (supply of trains), Ansaldo-Ineo consortium (signaling and telecoms), Cegelec (electrical substations) and the Colas Rail-Egis Rail consortium (track layouts and catenaries), as well as the French railways company, SNCF, which provided project management assistance to the Moroccan National Railways Office (ONCF).

The Casablanca-Tangier 200 km-long high-speed line is the first phase in a project that will stretch through 1500 kilometers to connect Tangier to Marrakesh and Agadir, two of Morocco’s tourist hubs.

The high-speed railway was built at a cost of €2.1 billion (about 23 billion dirhams). France offered 51% of the funding while the rest was provided by Morocco and several Arab funds, namely of Saudi Arabia (€144 million), Kuwait (€100 million), Abu Dhabi (€70 million) and the Arab Development Fund (€86 million).

The TGV’s initial capacity of 523 passengers will later be increased to 1,064 passengers after the construction of a double-track line.

When the project reaches its cruising speed, the Moroccan state-owned railway operator, ONCF, expects to operate 15 daily departures to and from Tangier and Casablanca.
According to the ONCF, the number of passengers would grow to 5 to 6 million a year after three years of operation, with an average occupancy rate expected to reach 70%.

This new railway line, linking the two economic and industrial poles, falls within the framework of Morocco’s global strategy to upgrade infrastructures and promote an efficient and modern rail transport system.

Since King Mohammed VI took the throne in 1999, some 70 billion dirhams were spent to develop Morocco’s railways and investments in the sector grew sevenfold just in the 2010-2015 period to stand at 34 billion dirhams.