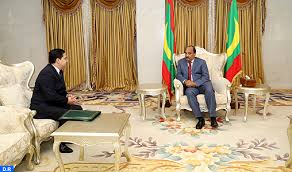 King Mohammed VI has addressed a message to President Mohamed Ould Abdel Aziz of Mauritania dealing with bilateral relations and the situation in the Maghreb region.

The message was conveyed to the Mauritanian head of state by Foreign Minister Nasser Bourita in Nouakchott Friday.

In a statement to the press after the audience, Bourita said he was received by the Mauritanian President, as an emissary of King Mohammed VI, carrying a royal message related to bilateral relations and the regional situation.

Bourita, who paid a one-day visit to Mauritania, added that at the bilateral level “there is a shared will to create a strong dynamic in Moroccan-Mauritanian relations at all levels”.

He also highlighted the two leaders’ common resolve to promote bilateral relations and raise them to the expected level, given the strong ties between the two countries and the two brotherly peoples.

Bourita noted that significant changes will take place in the future as part of the dynamic sought by the two countries’ leaders, adding that during the audience, “the Mauritanian president made a presentation on the situation in the region, based on his experience and Mauritania’s pioneering role in the region”.