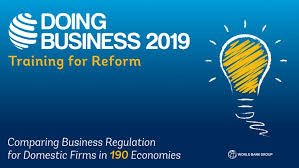 Morocco Moved up 9 spots in the 2019 Doing Business Ranking

Morocco has moved up 9 spots in the Doing Business 2019 report, to rank 60th in the world ranking, 2nd in the MENA region and 1st in the Maghreb.

The annual report published by the World Bank indicated that the Kingdom has bettered its performance when it comes to doing business.
The report, made public on Wednesday (October 31), compares business regulation for domestic firms in 190 countries.

According to the report ranking, Morocco tops the Maghreb with 71.02 points out of 100. In the Arab World, the country is ranked 2nd behind the United Arab Emirates which leads the Arab countries list.

The report, which is based on 10 major subindices that value and measure the attractiveness of every country for investors, ranks Morocco 34th for starting a business, 18th in dealing with construction permits, 59th for getting electricity, 68th for registering property, 112th in getting a credit, 64th for protecting minority investors, 25th for paying taxes, 62nd in trading across borders, 68th for enforcing contracts and 71th in resolving insolvency.

Commenting on Morocco’s performance, the authors of the survey indicate that the Kingdom facilitated starting business and simplified preregistration and registration formalities.

It has also managed to reduce time for registering property for investors, while increasing administrative efficiency. The Kingdom introduced electronic submission and processing of documents for exports, the report notes.

The country strengthened, as well, its border infrastructure for imports and exports and improved the likelihood of successful reorganization and creditors’ rights.

«Morocco Customs has been implementing a series of reforms in the area of human resources and communication since 1990s», wrote the authors of Doing Business report.