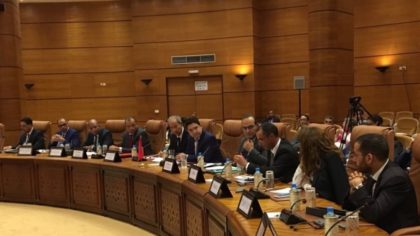 Morocco and Russia will sign shortly an agreement on civil nuclear energy. The deal would be the first of its kind to be sealed between the two countries.

The content of this agreement, proposed by the Russian side, has not yet been specified.

The announcement of this project was made Thursday in Rabat by a Russian official on the sidelines of the meeting of the joint Moroccan-Russian commission on economic, scientific and technical cooperation.

Convened under the chairmanship of Moroccan Foreign Minister Nasser Bourita and Russian Minister of Agriculture Dimitry Patrushev, the joint commission stressed the importance of the strategic Moroccan-Russian partnership, and agreed to bolster bilateral investment and diversify cooperation between the two countries in several key economic sectors.

During his visit to Rabat, Dimitry Patrushev reviewed with his Moroccan peer Aziz Akhannouch ways of boosting cooperation in the fields of agriculture and fisheries.

Talks also covered the evolution of Moroccan wheat market, the implementation of the cooperation accords signed by the two countries and the export to Russia of several Moroccan agricultural products including vegetables, fruits and citrus fruits.

The Russian Agriculture Minister reiterated his country’s willingness to further strengthen its cooperation and partnership with Morocco, which cover, besides agriculture, the sectors of energy, tourism and industry.

Between January and July 2018, bilateral trade totaled $900 million, he said, assuring that his country will make every effort to further increase the volume of trade with Morocco.

He said that several draft cooperation agreements in the field of transportation and telecommunication are being finalized.

The Russian official also highlighted Morocco’s economic assets, and its exceptional openness onto the African continent, saying these are all reasons that explain the interest shown by Russian investors in fostering partnership with the Kingdom.