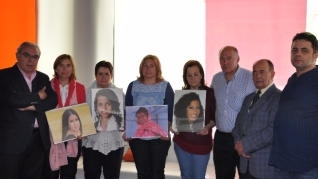 Members of this Association were received lately in Madrid by Spanish Secretary of State to Foreign Affairs Fernando Martín Valenzuela who was briefed on the plight and lamentable situation suffered by these Sahrawis women, some of whom have Spanish nationality.

During the meeting, spokesperson of “La Libertad es su derecho” Elisa Pavón made a presentation focusing on the complaint filed at UN Human Rights Council and the call launched by the European Parliament’s petitions committee, urging European institutions to act against the atrocities and the human rights violations committed by the polisario militiamen who are armed, funded and sheltered by Algerian authorities.

Mrs. Pavón underlined the responsibility of the Algerian government to ensure the respect of the rights of the Sahrawi women sequestered in the Tindouf camps and called on the Spanish government to take urgent actions to end the sufferings endured by these women, who are Spanish citizens.

The Spanish Secretary of State to Foreign Affairs pledged to maintain contact with the Spanish adoptive families of these Sahrawi women held against their will in the Tindouf camps by the Polisario separatists.

Human Rights Watch has expressed serious concerns over the restrictions imposed on Sahrawi women in the Tindouf camps, saying “holding an adult woman against her will is illegal confinement”.

HRW affirmed that “these women should exercise their freedom of movement”, noting that “past and future acts of illegal confinement are punished as crimes.”

As adults, these Sahrawi women “have the right to decide freely whether they wish to remain with their family members in the Tindouf camps or leave. Their right to freedom of movement does not depend on their nationality, but is a right enjoyed by everyone”, underlined the human rights organization.