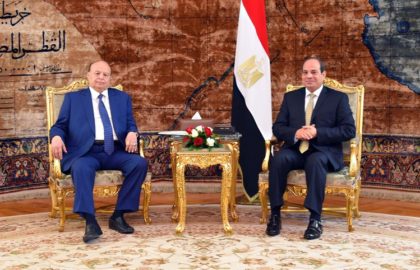 “We categorically reject that Yemen becomes a foothold for the influence of non-Arab forces, or a platform for security and stability threats against brotherly Arab countries or freedom of navigation in the Red Sea and Bab al-Mandab Strait,” Sisi told reporters after a meeting with visiting Yemeni President Abd-Rabbu Mansour Hadi.

Saudi Arabia last month temporarily suspended shipping of its oil through the Strait of Bab al-Mandab in the Red Sea after Houthis launched missiles against two tankers belonging to Saudi oil company Aramco. The attack damaged one vessel.

The Strait is an important waterway for international shipping activities through the Red Sea, connecting Asia with Europe through Egypt’s Suez Canal.

The rebels who have been fighting the authority of President Hadi since 2014 have control over Yemen’s Hodeidah port on the shores of the Red Sea.

Egypt is part of the Saudi-led international coalition backing up Hadi who was thrown out of capital Sanaa by the Iran-aligned Houthi rebels. Egyptian forces were basically tasked with securing the Strait.

Al-Sisi also stressed Egypt’s backing to Hadi’s authority and commitment to helping it restore stability to the country, Reuters reports.

“We discussed the dangers that the Red Sea had been exposed to because of the terrorism of the Houthi militias and its supporter, Iran, which aims not only to impact Red Sea security but Arab national security as a whole,” Hadi said.