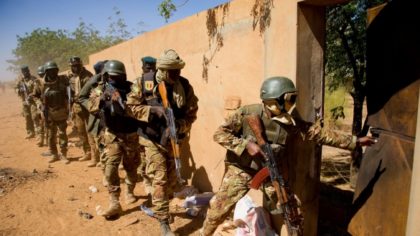 The numbers of terrorist attacks and deaths worldwide declined in 2017 for the third consecutive year, according to latest data released by the University of Maryland’s National Consortium for the Study of Terrorism and Responses to Terrorism (START).
Last year, there were 10,900 terrorist attacks around the world, which killed more than 26,400 people, including 8,075 perpetrators and 18,488 victims, show the Global Terrorism Database (GTD), a compilation of attacks published yearly by the University of Maryland.
Terrorist violence peaked in 2014 to nearly 17,000 attacks and more than 45,000 total deaths.
“While three consecutive years of decreases is encouraging, terrorist violence remains extraordinarily high compared to historical trends,” said Dr. Erin Miller, GTD program manager.
“In the decade prior to the September 11th attacks, the frequency and lethality of terrorist violence worldwide each year was less than one-third of what we saw last year”, he added.
In 2017, terrorist violence remained heavily concentrated in certain locations, and coincided with other types of political violence. More than half of all attacks took place in four countries: Iraq (23 pc), Afghanistan (13 pc), India (9 pc) and Pakistan (7 pc). More than half of all deaths took place in three countries: Iraq (24 pc), Afghanistan (23 pc) and Syria (8 pc).
The deadliest terrorist attack in 2017 took place in October, in Mogadishu, Somalia. Assailants detonated explosives in a truck near the Safari Hotel. More than 580 people were killed, and more than 300 others were injured.
The ISIS extremist group was responsible for the most terrorist attacks (1,321) and deaths (7,120) in 2017. The Taliban and al-Shabaab were the next most deadly group with 907 attacks (4,925 deaths) and 573 attacks (1894 deaths).
In the Middle East and North Africa, the number of attacks decreased to 3,780 in 2017, from more than 6,110 the year prior. That’s a decrease of almost 40 pc. And the number of deaths caused by terrorism in the region fell by almost half.
The major drops were recorded in Iraq, Turkey, Libya, Yemen and Syria. ISIS retreat in 2017 contributed to the decline. The terror drop in the Middle East, Asia and Africa has been the main driver of a global decline in terror. Attacks around the world went from about 17,000 three years ago to 10,900 last year.
The National Consortium for the Study of Terrorism and Responses to Terrorism (START) is supported by the U.S. Department of State and the U.S. Department of Homeland Security.
START uses state of the art theories, methods and data from the social and behavioral sciences to improve understanding of the origins, dynamics and social and psychological impacts of terrorism.