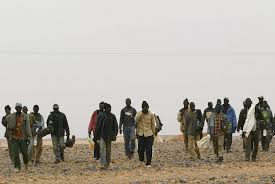 Algeria has been slammed by international rights organizations and the media for its notoriously brutal treatment of Sub-Saharan migrants who are often abandoned in harsh conditions in the southern desert.

A new report by the Associated Press that has investigated Algeria’s hostile policy towards Sub-Saharan migrants said that Algiers has abandoned more than 13,000 people in the Sahara Desert over the past 14 months, including pregnant women and children, expelling them without food or water and forcing them to walk, sometimes at gunpoint, under a blistering sun.

“Some never make it out alive,” said the news agency, which conducted the report in the Assamaka border village in Niger where surviving migrants cross the border on foot in heat as high as 48 degrees.

“Untold numbers perish; nearly all of the more than two dozen survivors interviewed by The Associated Press told of people in their groups who simply vanished into the Sahara,” it said.

Citing testimonies from survivors, the report said that many people lose their lives in the desert because they do not know the way.

Algerian authorities “tossed us into the desert, without our telephones, without money,” said a migrant survivor.

“You’re facing deportation in Algeria — there is no mercy,” he said. “I want to expose them now…We are here, and we saw what they did. And we got proof.”

Previously, the International Organization for Migration (IOM) said that dozens of Sub-Saharan migrants have died in abhorrent conditions on the Algerian-Niger borders as Algiers continues summary expulsions.

Algeria is rebuked in several international human rights reports, including Human Rights Watch and Amnesty International, for bad treatment of Sub-Saharan migrants as it continues its mass expulsions of these migrants and asylum seekers who are deprived of a chance to applying for international protection under the 1951 Geneva Convention to which Algeria is a party.