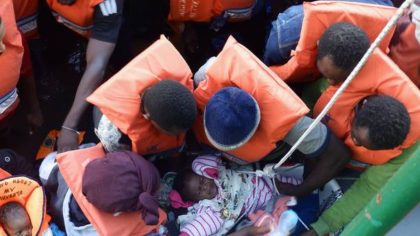 Libyan coastguards have picked up about 1000 African migrants on inflatable boats in several operations Sunday and recovered the body of ten others, officials at a naval base said.

All migrants were given humanitarian and medical aid, and were taken to a naval base in the capital, Tripoli, and a refugee camp in Khoms town.

Libya is the main gateway for people attempting to reach Europe by sea, with more than 150,000 people making the deadly crossing in each of the past three years.

Most of the migrants risking their lives on the Mediterranean begin their journey in the oil-rich North African nation.

Earlier this month, the UN imposed sanctions on six Libyan nationals suspected of involvement in human trafficking, including a top regional leader of the Libyan Coast Guard.

Italy and the European Union have provided funding and training assistance to the Libyan Coast Guard in order to combat human trafficking.

On Monday, Italy’s interior minister Matteo Salvini, who is vowing a new hardline stance on migration, announced he would visit Libya.

The announcement comes the day after EU leaders met to try resolve differences over how to manage the issue of refugees and economic migrants.