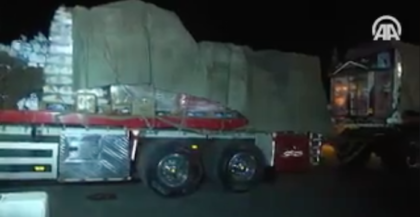 The Moroccan humanitarian aid destined to the Palestinian people, at the instruction of King Mohammed VI, reached the Gaza enclave Friday night.

Twelve large trucks from Cairo’s Eastern airport base conveyed the humanitarian assistance through the Rafah border crossing post, while the medical delegations of the Royal Armed Forces (FAR) to manage and supervise the medical-surgical field hospital to be deployed in Gaza were driven aboard buses. The operation was conducted in coordination with the Egyptian and Palestinian authorities.

In total, 16 Moroccan military aircrafts loaded with foodstuffs, medical equipment, medicines, and blankets had landed at Cairo’s eastern airport base since last Monday.

The multidisciplinary field hospital deployed in the Gaza Strip part of Morocco’s humanitarian assistance will provide care to the Palestinians who have been injured by Israeli forces last May and this June, as well as to the entire population of the area, in various specialties, including general medicine, dentistry, emergency medicine, cardiology, ophthalmology, ENT, gynecology-obstetrics, trauma, pediatrics and radiology.

King Mohammed VI had supervised in person at the Casablanca International Airport on May 29 the airlifting of the humanitarian aid destined to the Palestinian people.

This humanitarian gesture reflects the steadfast and acting solidarity of King Mohammed VI and the Moroccan people towards the Palestinians.

In addition to other actions taken by the Kingdom as part of its multidimensional support for the Palestinian people, the humanitarian assistance will alleviate the sufferings of Gazans who are subjected to the Israel-imposed embargo and ongoing Israeli aggression. The assistance will also offer qualitative support to Gazan humanitarian and health institutions, which are crippled by lack of human resources and medical equipment.

Over 100 Palestinians were killed and thousands were wounded in the demonstrations staged along the border fence between Gaza and Israel since March 30, in commemoration of the 70th anniversary of the Nakba, when an estimated 750,000 Palestinians were forcibly expelled from their homes in 1948 to set up Israel.

Israeli forces, which have been firing with live ammunition at the unarmed demonstrators, increased their repression on May 14, when more Palestinians took to the street to protest the transfer of the US embassy from Tel Aviv to Al Quds. At least 62 Palestinians were killed that day and hundreds were injured.

The aid to Ramallah and Al Quds will be shipped through Jordan.