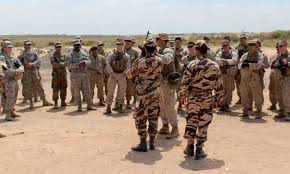 The US Department of Defense has praised Morocco’s role as a strong and stable partner in North Africa, hailing the noteworthy military contributions made by the North African country as part of coalition efforts to defeat ISIS extremist group in Iraq and Syria.

The remarks were made by the Pentagon in a press release issued following the Exercise African Lion 2018, which concluded in Morocco.

The drills of African Lion included this year, besides the US and Morocco, Burkina Faso, Canada, Chad, Egypt, France, Germany, Italy, Mali, Mauritania, Senegal, Spain, Tunisia and the United Kingdom.

During the exercise, the US military and Moroccan Royal Armed Forces strengthened interoperability and further developed tactics, techniques and procedures of participating nations to counter violent extremist organizations.

The exercise involved various types of training across the Moroccan coastline, including an aviation training exercise supported by airmen from Ramstein Air Base in Germany and soldiers from the 5th Quartermaster Company from Kaiserslautern, Germany, and the 173rd Infantry Brigade Combat Team (Airborne) from Vicenza, Italy.

“We’re working through the mechanics of integrating all of our operations so that if the time comes, we stand united against the threat”, added the African Lion 2018 deputy mission commander.

The team took on US Air Forces in Europe and Africa’s first drop of the newly updated Joint Precision Airdrop System using an attached Modular Autonomous Guidance Unit to GPS-guide its cargo directly onto its target.

Aircrew dropped six bundles from a high altitude and all landed safely within meters of the desired target. This demonstrated the accuracy of the new system and a significant proof of concept for both the Army and the Air Force.

“It just showed the capability of our wing to start from scratch on a dirt field, survey, determine suitability and land a C-130J there,” said Air Force Capt. Laura K. Martineau, a pilot with the 37th, and African Lion 2018 mission commander.

Additionally, the Atlas Mountains presented the pilots with some great low-level performance challenges, Martineau explained. The higher the altitude, she said, the more difficult it is to quickly climb.

“Our training prepares us to ingress into a joint forcible entry-type situation and drop a considerable amount of personnel at once,” Martineau continued. “The Moroccans have also been observing procedures in-flight; it’s been incredible training for everyone involved”, she said.

“When we have competent partners ready to aid in maintaining all of our freedoms, posturing against today’s security threats becomes exponentially easier,” underlined Air Force Capt. Josh Kelsey.
It’s about “building partnership capacity with cooperative nations”, added Kelsey, saying “we are making sure we are building relationships that last beyond our current stay here”.